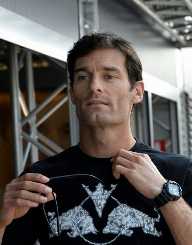 Mark Webber is a native of Queanbeyan in New South Wales, and he was born to Alan Webber, who was motorcycle dealer. His date of birth was 27th August 1976, and he attended high school in Queanbeyan. He graduated from Karabar High School and took an early interest in the game of motorsports.

When Mark was 14 years old, he started racing using a motorcycle but made the switch to car racing in no time. His active racing career began at this time, and by 1993, he was already a championship winner in New South Wales.

Representing NSW, Mark Webber entered the Australian Formula Ford Championship and ended up at the 14th place. This was, however, his debut season and there was nothing to worry about.

Flip over to 1995, and the tide of events had turned. Mark Webber inched up several victories in this particular year and made it to the 4th nationally in the Australian Grand Prix. He was able to get a sponsorship deal for the next seven years with the Australian Yellow Pages with the help of Ann Neal.

Mark was able to hold down a place in the 1996 Australian championship by competing as a member of the Van Diemen team. He was on point during the British Formula Ford Championship and ended in the 2nd position.

When the Australian Grand Prix held in 1996, he came out tops and reprised same at the Spa-Francorchamps open and Formula Ford Festival. Mark Webber left Australia after his string of wins to slug it out for a place on the world stage.

By 1997, Mark was in the field as a Formula Three racer. He managed a 4th place finish at the end of the season. However, his outstanding display was remarkable, and Mercedes-AMG approached him. He became a Mercedes racer as a junior driver. He ran under this banner in the FIA GT Championship in 1998. He teamed up with Bernd Schneider to win several races.

Mark Webber’s Formula Three experience primed him for a place in Formula One, and there was no doubt that he will have his day. There was a 2–day test that was held in 1999 at the Barcelona trials. He was a test driver and held onto this till 2001.

Mark Webber’s entry into the Formula One field was official at the Melbourne Grand Prix in Australia. During the competition, he had a first lap crash that set him back, and he ended up in the 5th position.

Mark was back to his best at the Hungarian Grand Prix, Belgian Grand Prix, and the Malaysian Grand Prix. His form and performance caught the attention of the Jaguar Racing Team, and they signed him up for the 2003 season.

Mark Webber made it to the third position at Brazil open after an unlikely start that almost shut him off the pole position. He was able to sign a massive contract after the Brazil outing that saw him pocket 6 million USD. He chalked up the points in Europe and was within the top 10 ranking on the global racing pecking order.

Mark stayed on at Jaguar till 2004 but his performance already was at its ebb, and he had to retire. He came back and made off again in eight other episodes of retiring and returning. He was placed 13th at the end of the year.

In 2006, Mark Webber was now with the Williams team and only managed eleven points along with his co-driver at the team. He was still strong at the beginning of each race but failed to keep the momentum to the end. When 1996 ended, he was placed 14th in the motor racing circuit.

He headed up to Red Bull Racing in 2007 after the end of his Williams contact. He met David Coulthard here and admired the experience he had under his belt. At the European Grand Prix, he made it to the 3rd position and his overall 2nd podium finish in his racing career.

Mark, however, did not make it to the podium in 2008 but amassed 20 points and got a season’s placing at the 10th position.

Sebastian Vettel joined him in 2009 at the Red Bull Racing, and he was at the podium once more. At the German Grand Prix, he ended up at the first place and celebrated his maiden victory. He reprised the same top finish in Brazil that year and ended the season at the 4th place.

Mark Webber led the field at the Monaco Grand Prix and became the first Australian to have that record. However, going into 2011, Webber failed to notch any victory and only managed mid-field finish with the exception at Brazil Grand Prix, where he had a victory. When the year ended, he was at placed 6th. He was also able to finish with the fastest lap time seven times during the season, and this was a record.

Mark remained with the Red Bull Racing Team up to 2012, and he was active with Vettel. He was 4th placed in Malaysia and reprised same in China and Bahrain. He made it tops in Monaco.

Mark Webber competed last in Formula 1 in 2013 and was able to record two pole positions at the Abu Dhabi and Britain meets. He made it to the podium four times this season. He was able to end up with the fastest lap in the Brazil circuit at Interlagos. He ended up 3rd place.

After retirement, Mark was signed by Porsche, and he drove the LMP1 car, which was new for the FIA World Endurance Championship. He used same for the Le Mans 24 hour race. He made it 3rd place and ended at the 9th position in the season’s ranking

Mark Webber had the cool and confident temperament when behind the wheels. He showed remarkable speed and a sense of superb control. This gave him the needed edge over other racers as he got past the limits of his car each time.

Mark Webber was the winner of the Rookie of the Year Award in the year 2002. He also got the Lorenzo Bandini Trophy in the year 2006. By 2010, he won the Hawthorn Memorial Trophy. The fastest lap he made in 2011 earned him the DHL Fastest Lap Trophy.

He had eight podium placements at the end of 2009 as against two podium finish of his career until that year. His 2010 mentions included ten podium placements and victories in Britain, Hungary, and Spain. 1n 2011, he was placed 3rd in the season’s rankings just like he did in 2010.

Mark Webber married Ann Neal and had three children from the union. Isaac, Bodhi Rain, and Lover Webber were the names of his kids.