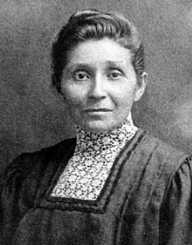 Susan LaFlesche Picotte was born on the Omaha Reservation, Thurston County, Nebraska, on June 17, 1865. She was the youngest child of four children to biracial parents, Mary Gale and Joseph LaFlesche. Her siblings were Susette LaFlesche Tibbles, Rosalie, and Marguerite. Her half-brother Francis LaFlasche became a prominent anthropologist, ethnologist, and musicologist. Growing up, Susan took an interest in the traditions and heritage of Omaha. However, her parents viewed some of the native rituals as having negative repercussions in the developing world. She was therefore not given her an Omaha name. They also avoided her having the Omaha traditional tattoos on her forehead.

LaFlesche received early education at a boarding mission school on the reservation. The school was run by the Presbyterians until the enactment of the Peace Policy, in 1869 when the Quakers took over. She continued her education at Elizabeth Institute, in Elizabeth, New Jessy, where she studied for two years. In 1882, she returned home to teach at the agency school. From 1884 to 1886, she studied at the historical black school, Hampton Institute. She graduated on May 20, 1886, winning the Demorest prize, awarded to the highest scoring student in the junior year. After her graduation, she enrolled at the Woman’s Medical College of Pennsylvania, one of the few schools that admitted women who were pursuing medical studies.  Since tuition for medical school was costly, LaFlesche relied on a sponsorship from the Women’s National Indian Association. She graduated on March 14, 1889.

In 1889, LaFlesche returned home to become the physician at the government boarding school, operated by the Office of Indian Affairs. While there, she taught hygiene and healthy lifestyle. She also catered for people in the community despite not being part of her obligations. During this period, she was also working as a medical missionary for the Women's National Indian Association. She cared for patients with cholera, influenza, dysentery, trachoma, and tuberculosis. Though a health practitioner, LaFlesche, had frail health and battled several health problems. She fell ill and was bedridden on December 1892, staying out of work for several weeks. Her poor health coupled with having to cater for her dying mother would result in her resignation in 1893. Bouncing back on her feet, Picotte continued her practice, caring for both Omaha and white patients.

Picotte sought to improve the general health of the people and educate them on how to ensure a healthful lifestyle. Tuberculosis had no cure at the time, but Picotte worked intensively, teaching the people on preventive measures. In 1907, she became a founding member of the Thurston County Medical Society and served on the Walthill health board. She also served as the chairperson of the Nebraska Federation of Women's Clubs. Alcoholism was one of the major problems on the reservation. To curb this, she supported strict measures including corporal punishment to prevent people from taking alcohol. She gave lectures on the health risk of excessive alcohol intake and the practice of temperance. She advocated for the construction of a health facility on the reservation, which was ultimately completed in 1913.

LaFlesche dated Thomas Ikinicapi, whom he met while attending Hampton Institute. The relationship did not end in marriage. She married Henry Picotte, a divorced Sioux Indian in June 1894. The couple had two sons, Caryl Picotte and Pierre Picotte. She suffered several health problems in most of her life, becoming deaf at the latter part of her life. She died of bone cancer on September 18, 1915. Picotte lays near her mother, father, sisters, and husband at the Bancroft Cemetery.

The Dr. Susan Picotte Memorial Hospital, (currently a community center) is in her honor. In 1993, the facility became a National Historic Landmark.