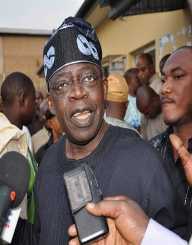 Bola Ahmed Tinubu was born on March 29th, in 1952. He is also recognized as Jagaban or Asiwaju. In 1993, Bola Tinubu took over the senatorial post of Lagos West constituency. This was months before the military coup that occurred later that year. When Nigeria regained its democracy, he became the Lagos State’s governor. This is a post that he held from 1999 to 2007.

Bola Tinubu was born on March 29th, 1952. His birthplace was in Lagos, Nigeria. For his early education, he enrolled with St. John's Primary School. After this, he also went to Children's Home School situated in Ibadan. Years later, in 1975, he moved to the United States where he would continue with his studies. Here, he enrolled at Richard J. Daley College located in Chicago, Illinois. After that, he went to school at Chicago State University. In 1979, he graduated with a B.S. degree in accounting. After his graduation, Tinubu landed on several jobs for different American companies such as Deloitte, Haskins, & Sells, GTE Services Corporation, and Arthur Andersen.

In the early 1980s, Bola Tinubu returned to his homeland and went to work with Mobil Oil Company in Nigeria. He quickly rose up the ranks in his new job and sooner or later he was one of the executives.

Bola Tinubu ventured into politics in 1992. He was under the umbrella of Social Democratic Party. He was part of a political group that was headed by Shehu Musa Yar'Adua. With time, he became the senator to the Lagos West constituency. In 1993, following the annulment of the presidential results, Tinubu earned himself the recognition of being one of the co-founders of National Democratic Coalition. This party was established for the main reason of restoring democracy in Nigeria. Apart from this, it strived to ensure that the June 1993 presidential results were recognized.

The following year, Bola Tinubu was exiled from the country. He lived outside Nigeria for four years before later returning in 1998. He only returned since Sani Abacha, a military dictator, passed away.

During the 1999 elections, Bola Tinubu was elected as the Lagos State governor. He had defeated his rivals including Wahab Dosunmu and Funsho Williams. Over his 8-year period as a governor, he brought several reforms more so in the line of education. Also, he also initiated new road construction projects all over Lagos State. Due to his passion for helping the state, he was re-elected to office in 2003.

In 2007, however, Babatunde Fashola from the Action Congress won the elections bringing an end to Tinubu’s gubernatorial career.

Bola Tinubu’s wife is called Oluremi Tinubu. She holds the senatorial office for Lagos Central. Tinubu’s mother named Abibatu Mogaji was a famous businesswoman. She passed away on June 15th, in 2014. She died at the age of 96 years.