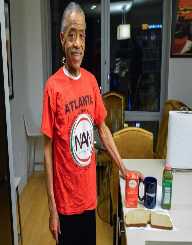 Al Sharpton is an American TV talk show host and Baptist minister born on October 3rd, 1954. He is also a civil rights activist famous for his role as a great advocate of the Black American community. During the reign of both president Barrack Obama and Bill Clinton, he provided council for them as a White House advisor. During his [political career, he tried the Senate position before running for the presidency in 2004 as a Democrat. As a radio host, Al Sharpton owns and runs Keepin' It Real, a radio talk show.

Al Sharpton was born on October 3rd, 1954. His place of birth was in Brooklyn, New York in the United States. He is the son of Alfred Sharpton Sr. along with his wife, Ada. Four years old had his first experience as a pastor when he was four. This was when he gave his very first sermon and later had a tour along with Mahalia Jackson, the late gospel singer. In 1963, his father left the family and married the half-sister of Sharpton. As a result, his mother began serving as a maid to make ends meet. They even moved to Brownsville a neighborhood of Brooklyn where they lived in public housing projects.

While in Brookline, Al Sharpton schooled in its public schools. Later he attended Samuel J. Tilden High School where he later graduated in 1972. Subsequently, he joined Brooklyn College. However, two years later, in 1975, he dropped his studies from the college. From 1973, he served as a tour manager for James Brown till 1980.

In 1992, Al Sharpton ran for the Senate position in the US and later in 1994 and failed in both times. Later in 1997, he decided to try for the position of New York’s mayor. Even though his attempts failed, the determined Sharpton never gave up. In fact, in 2004, he even aimed for a higher position, this time running for the presidency with the Democratic Party ticket. During the nominations, he only managed to be a contender since he did not get much support. Currently, Sharpton remains a great social and political activist and has been involved in many controversies.

Al Sharpton tied the knot with Kathy Jordan, a backup singer in 1980. The couple met in 1971 during Sharpton’s tour along with James Brown. However, in 1974, the two parted ways. He then wedded Marsha Tinsley but had an affair with Aisha McShaw while still a married man. Al Sharpton is the father of two daughters, Dominique and Ashley.