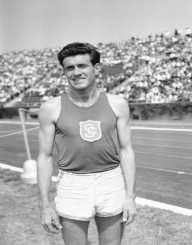 Born in January 1917, Louis Silvie Zamperini was a World War II prisoner of war, an outstanding Olympic athlete and an inspirational figure who touched multitudes of crowds with his life experience and as a writer.

Louis Zamperini was raised in California by Italian immigrant parents in the town of Olean, New York. In high school, he joined the athletics team. He went ahead to break a mile record which stood for 20 years that earned him the scholarship to the University of Southern California due to his track competence. His passion for athletics led him to excel at long-distance events.

Zamperini successfully competed in the 1936 Berlin Olympics while still a teenager. Zamperini participated in many athletic events and finally graduated from USC in 1940, a year that changed the life of the renowned runner entirely.

When World War II broke out in 1940, the games that were set to happen in Tokyo were canceled, and he was among the participants. As duty called, Zamperini enrolled in the Army Air Corps. His plane crashed in the combat due to mechanical problems, though he and two other comrades survived, they were stranded for days on a raft. One of the men did not make it to the shore while Zamperini and the other survivor were washed to the dry land.

The Japanese soldiers captured them and taken as prisoners of war. They underwent torture for two years and Louis Zamperini was officially declared dead by the United States Military, and all hopes of getting him alive were lost. After the war ended in 1945, he was released and returned to the U.S as a hero.

After returning home, Louis Zamperini suffered from the trauma he had experienced while he was captured, he was still scarred and damaged by the whole ordeal. He resorted to alcoholism as a way of coping with the pain and hurt, but it strained his marriage to Cynthia Applewhite. As they say, love can withstand anything; they remained married until her death 54 years later. Zamperini made a turnaround in his life and started his healing process after hearing the Graham sermon in 1949; he left the bottle and got inspired to getting better and well.

During the healing process Zamperini was able to forgive his Japanese tormentors, some in person! He visited a prison in Tokyo where some were serving their sentences for their war crimes and pardoned them. As a strong-willed person he was, Zamperini returned to Japan carrying the torch for the winter games that were held at Watanabe.

His experience in the hands of the Japanese soldiers during the war become a motivation and led him to become a famous inspirational speaker. His story of survival, strong will to live and redemption inspired the release of the 2014 biography which later became a film that was directed and produced the famous actress Angelina Jolie. Zamperini wrote two memoirs and were titled Devil at My Heels in the year 1956 & 2003.

Zamperini received Air Medal and Prisoner of War Medal for commendable achievements and for being taken a prisoner while in Action against the enemy of the United States respectively. Louis Zamperini got ill with pneumonia and eventually succumbed on July 2, 2014.