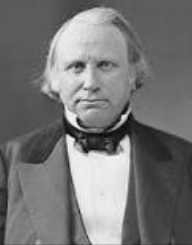 Henry Wilson was a Senator and Vice President of United States of America. He fought for the abolition of slavery. He worked with Abraham Lincoln on Anti-slavery matters.

Henry Wilson was born to the couple, Winthrop and Abigail Colbath. Winthrop was a war hero of the War. He worked on farms, wage worker, and trader.

Wilson had some pre-school education and worked at a farm for ten long years as a labourer. Wilson enriched his paltry education by borrowing books from his neighbours. He studied history and biographies.

In 1833, Henry Wilson left New Hampshire and went by road to Natick, Massachusetts in search of a job. He had an apprenticeship with a shoemaker for five months and started his own business. His ambition was to study law by the savings he could make. He succeeded as a businessman. He was even called as Natick Cobbler.

Wilson during this period devoted to reading and enrolled at Natick Debating Society to become a talented speaker. There was a setback in his health, and he moved to Virginia to improve his health. Wilson learnt about discussions about the abolition of slavery during his stay at Washington DC. He also noticed black and white families being separated.

Henry Wilson decided to work for the abolition of slavery. He pursued his education at New Hampshire colleges in many places. He was drawn into debt and spent all his savings on education and traveling. He worked as a school teacher, saved some money and ventured into shoemaking again. Wilson was successful, and his business grew. He employed several staff.

Henry Wilson joined a political party and canvased for William Henry Harrison in 1840. Wilson was chosen for the Massachusetts House of Representatives in 1840. He was in this position from 1841 to 1842.

Wilson was selected as a member of the Massachusetts State Senate in 1884. He held this membership for four years. He became the President of the Senate for two years.

He was not satisfied with the political party which he had joined, as the party was trying to agree on issues of slavery. Wilson and another supporter of abolition appealed to the Congress opposing takeover of Texas.

Wilson left the party in 1848 when he was the representing in the Whig National Convention since a person who owned slaves was made the President.

Wilson joined the para-military in 1843 as a Major and later elevated to the rank of a colonel. He became the brigadier general to occupy that position till 1852.

He held the position of the chairman at the Free Soil Party’s convention at Pittsburgh. He contested for the Governor of Massachusetts in 1853 and 1854 but lost.

Henry Wilson became a member of the United States Senate in 1855 with the alliance of other anti-slavery parties. He later joined the newly created Republican Party which had identified itself as anti-slavery ideology. Wilson was selected as Senator which position he held till 1873. He resigned as a Senator in 1873.

Wilson advocated the abolition of slavery in the United States and cancellation of the Slave Act of 1850. Wilson supervised the military affairs during the Civil War and associated with Abraham Lincoln on a regulation about the military. He was given the Military Order of the Loyal Legion of the United States.

In 1862, Henry Wilson managed to get his bill on anti-slavery enacted. The bill was passed into Law after President Lincoln approved it. A Proclamation was made in 1863 freeing all slaves in Captivity. Wilson also brought a bill that would enable funds for primary education for African American adolescence and made law in 1863. Abraham Lincoln was assassinated in 1865. Andrew Johnson became the President.

Wilson was elected as Vice President in 1873, and he held that position till his death.

Henry Wilson married Harriet Malvina Howe in 1840. They had a son, Henry Hamilton Wilson. Henry worked in the Defence Services till his death in 1866.