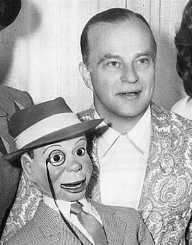 Edgar Bergen was born, on February 16, 1903, in Chicago, Illinois, USA. His parents were Nilla Svensdotter and Johan H. Berggren.

Edgar Bergen first became interested in ventriloquism when he was a preteen. He taught himself the skill and worked on his skills although his school days. Even when Bergen was in college, at Northwestern University, he often put on shows to help to pay for his education. His main puppet even had a name-- Charlie McCarthy. However, Bergen left college before he could earn a degree.

Edgar Bergen and his puppet Charlie began acting in vaudeville shows around the late 1920’s. It was around this time that Edgar legally changed his last name from Berggren to Bergen, in part so it would be easier for other people to pronounce and recognize. Bergen and his puppet once performed at the Rainbow Room. It was there that they were “noticed” by entertainment professionals for the first time.

Once Edgar Bergen was “discovered,” he appeared on a television show alongside the musician Rudy Vallee. The episode Bergen was on was so famous that it helped him to earn a role on the radio show The Chase and Sanborn Hour. It was odd to have a ventriloquist on the radio. Many people did not understand what made the radio show so popular then, and it is still a mystery today. He also appeared on several other television shows and shorts during the 1930’s, including The Goldwyn Follies, Letter of Introduction, and Double Talk.

During the 1940’s, Edgar Bergen continued to work on his radio show. He also appeared in several movies during this decade, including Song of the Open Road and Fun & Fancy Free. In 1949, he also began appearing on The Charlie McCarthy Show, which ran until 1952.

Bergen’s radio show ended in 1956. In this decade, Bergen appeared in several television shows and movies, mostly in guest acting roles. Some of the shows and movies he appeared in include Mystery Lake, The Milton Berle Show, Five Fingers, and Shower of Stars.

Edgar Bergen continued acting in film and television until his death.  Some of his last movies included The Phynx and Won Ton Ton: The Dog Who Saved Hollywood. He also had small roles in the television shows The Waltons and The Red Skelton Hour.

Edgar Bergen has three stars on the Hollywood Walk of Fame. He has one for his work on the radio, in television, and in the film. He earned all of these stars in 1960.

Edgar Bergen also has an honorary Academy Award and a Lifetime Achievement Award from the Screen Actors Guild.

Edgar Bergen married Frances Westerman in 1945. This couple had a daughter together, Candice Bergen, who later became an actress. Their son, Kris Bergen, also became in television, but as an editor instead of an actor.  The Bergen couple remained married until Edgar’s death.

Edgar Bergen died on September 30, 1978, in Nevada, USA. His cause of death was Kidney disease. He was 75 years old when he passed away.