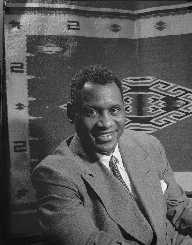 With an international career as a singer, actor, athlete and civil rights activist, Paul Robeson was, undisputedly, one of the most well-known African-Americans of his time. As an activist, he advocated for people’s rights not only in his home country but also in other countries around the world. He spoke and sang for justice in 25 languages throughout Europe, United States, Africa, and the USSR. Consequently, most people around the world referred to him as “a citizen of the World.”

Paul Robeson had friends from various parts of the world including Nairobi, Harlem, and Moscow, etc. Some of his famous friends were Jomo Kenyatta (from Kenya), Nehru (from India), James Joyce (writer), Dr. Du Bois (historian) among others. This man was, indeed, an epitome of the 20th-century renaissance man.

Paul Leroy Robeson was born on 9th April 1898, in Princeton, New Jersey, the USA to Reverend William Robeson and his wife, Maria Louisa. He was the youngest in the family and had two brothers, William Drew Jr., Ben, and Reeve and a sister Miriam. His mother, who was almost blind, died in a house fire when he was only six years old.

Having completed his primary education, Paul Robeson won an academic contest for a scholarship to Rutgers College, and in 1915, he became only the third African-American in history to gain admission to his College, and during that period, he was the only one. At Rutgers College, he joined debating club, school football team, and athletics team.

Paul Robeson also sang both off and on-campus. He was particularly recognized for his singing and football talents.

During this time, his father fell ill, and he took his time off caring for him. However, his father soon died, and in 1919, Paul Robeson joined New York University, School of Law. To be able to support himself financially, Robeson was employed as an assistant coach at Lincoln.

In February 1920, having felt uncomfortable in New York, he transferred to Columbia School of Law. Here, he also sang and acted in off-campus productions and was also a National Football League player.

Paul Robeson later graduated receiving his LL.B after which he performed in Emperor Jones as well as All God’s Chillun Got Wings.

Paul Robeson got employed in a law firm in New York but soon left due to racial strife; a white secretary blatantly refused to take orders from him. From that point, his career as a lawyer came to an end after which he turned to his artistic talents which he used to, among other purposes, promote African-American culture.

Paul Robeson later moved to England in 1928 where he made his first appearance in London premiere of Show Boat. Having realized that Europeans were not as racists as the Americans, he settled in London with his wife for several years.

His next appearance was in Othello. For his lead role in Othello, Robeson gradually started earning international acclaim. He later appeared in Sanders of the River, in the 1930s, after which he became a superstar.

Later, having developed great concern for the suffering of the people of other cultures he went back to his home country and became politically active. He, however, still performed and talked against racism especially in conferences, strike rallies and labor festivals around the world.

Paul Robeson received threats of his economic ruin but continued advocating for human rights becoming very active in the Council of American Affairs. He politically got involved in response to the Spanish civil war, social injustices, and fascism.

Due to his criticism of the United States Government as well as affiliation with communism, the US state department denied him a passport, and this had a major effect on his finances. In 1958 the United States Supreme Court’s verdict led to the restoration of his travel rights.

His health had however deteriorated. He retired in the 1960s and went to Philadelphia where he lived the rest of his life privately.

Paul Robeson was named a consensus twice and was the class valedictorian in Rutgers College. Later, he was also inducted into the Rutgers College Football Hall of Fame.

In 1920, Paul Robeson started dating Elsanda “Elsie” Goode, and in August 1921, they got married. In his later life, he fell ill and fully retired from public life. On 23rd January 1976, he died in Philadelphia aged 77 years.