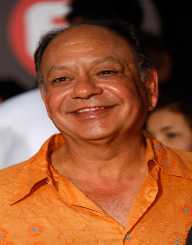 Cheech Marin is a well-known comedian & actor who forms one half of Cheech and Chong, the comedian duo with Tommy Chong. Apart from acting, Cheech Marin has also been successful as a director.

Cheech Marin was born on July 13, 1946, in Los Angeles, California. His real name is Richard Anthony Marin, and his star sign is Cancer. His father Oscar was a policeman and his mother Elsa was a secretary. Cheech Marin got his nickname Cheech from an uncle.From his childhood, Cheech Marin was a comedian. He often made his friends laugh with his comical acts in different music bands.

Cheech Marin went to study English at the California State University, but fearing that he would be drafted to serve in the Vietnam War, he dropped out and fled to Vancouver, Canada.

Cheech Marin was doing small jobs to support himself financially when he came into contact with a musician named Tommy Chong. Chong was already running a comedy troupe, and together, they formed a stand-up, musical comedy group named Cheech and Chong. Their acts gained popularity, and they shifted to Los Angeles to perform in front of a larger crowd. Their first album Cheech and Chong came out in 1971. One year later, they released Big Bambu, which went on to become the best-selling comedy album of that time. One year later, they won a Grammy award for Los Cochinos.

By this time the nation was being swept by the Marijuana culture, and Cheech & Chong released Up in Smoke. They became the face of the marijuana culture and released many sequels to Up in Smoke. Although the business was successful, they decided to go separate ways in 1985. Their last album together was Get Out of My Room before they reunited after 23 years.

Marin’s initial solo career had moderate success. His directorial debut Born in East L.A., had moderate viewership. Marin also lent his voice to the character Tito, in the Disney feature Oliver & Company. It wasn’t until 1994 that Marin’s stars shined. He voiced Banzai in the film The Lion King. The film was a major success and Cheech once again gained mainstream popularity. Cheech Marin then acted in films like Desperado and From Dusk till Dawn. In 1996, he was cast into the role of Inspector Joe Domingues in a TV series titled Nash Bridges.

Cheech Marin appeared in many of Robert Rodriguez films including Spy Kids &Once Upon a Time in Mexico. Marin also lent his voice in Cars. He also appeared in the famous TV series Lost. Cheech Marin partnered with Chong again for the Light Up America tour in 2008. He once again voiced Ramone in Cars 2 (2011) and Cars 3(2017). He is set to appear as Danny in The War with Grandpa.

Cheech Marin likes to collect art and has the largest private collection of Chicano art. He has had three marriages. He first married Rikki Marin in 1975. They separated after nine years. In 1986, two years after his divorce from his first wife, Marin married Patti Heid.

They remained together for 23 years after which they divorced. Cheech Marin married Natasha Rubin, his third wife, in 2009. Marin has three children – a son Joey, and two daughters Carmen, and Josephine.