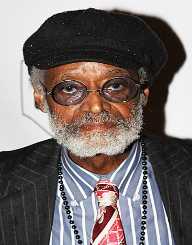 American filmmaker and author Melvin Van Peebles was born in Chicago, Illinois on the 21 August 1932. The family relocated when he was young, and he was raised in Phoenix, Illinois.

After graduating from Thornton Township High (1949), he spent a year at West Virginia State College. He then transferred to Ohio Wesleyan University and graduated with a BA in English Literature (1952). In 1959 he studied
astronomy at the University of Amsterdam in The Netherlands.

Van Peebles spent three years in the U.S. Air Force as a flight navigator on a B-47 bomber. Upon discharge, he traveled to México before returning to the United States and living in San Francisco, where he worked as a cable car gripman (1956 until 1958). It was while living in San Francisco that he became interested in film and starting experimenting with making short films including A Pick Up for Herrick and Sunlight, A King.

He also wrote The Big Heart, based on his experience working on the San Francisco cable car gripman. The film led to him being fired and in 1959, he went to Hollywood to pursue a career in the film industry. After finding no outlet for his writing or work as an actor, he relocated with his wife and children to Europe. Initially, they lived in Holland, and he worked with the Dutch National Theater (1959) while also studying astronomy at the University of Amsterdam. He left his wife in 1960 and moved to Paris where he worked as a street entertainer and nightclub singer to support himself.

He was living in Paris when he wrote La Permission (1967). The French Cinema Center gave him a grant of $70,000, and this was used for a screen adaptation of La Permission. The film was titled The Story of a Three Day (1968) a story about a young French woman and an African American soldier. Van Peebles drew the attention of Hollywood, and he returned home to direct Watermelon Man (1970). Watermelon Man, a story dealing with racial issues, was the first Hollywood feature film directed for an African American.

His next film was the groundbreaking Sweet Sweetback’s Baadasssss Song (1970). With money, he had earned from and a loan from Bill Cosby, Van Peebles was able to finance the production independently. Van Peebles wrote, directed and produced the film. He also starred in the film and wrote the score. Focusing on racism and police brutality, the film was a financial success and proved to be a landmark for African-American filmmakers. Van Peebles released an album Brer Soul in 1969, a vocal style which was a harbinger of rap.

Van Peebles has also worked as an options trader on the American Stock Exchange.