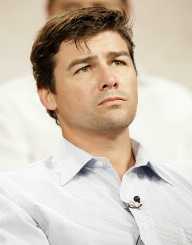 American actor Kyle Chandler was born on the 17 September 1965 in Buffalo, New York. His parents were Edward Chandler, a salesman, and Sally Chandler, a housewife. The couple had four children. When Chandler was in his teens, his father died of a heart attack and his mother raised the family on her own. He was brought up in Lake Forest, Illinois, and Loganville, Georgia.

Kyle Chandler was a pupil at the George Walton Academy, a private school in Monroe, Georgia. After graduating from high school, he enrolled at the University of Georgia. In 1988 Chandler was just sort of enough credits to earn his degree in drama when he abandoned his studies to work in television.

Kyle Chandler left university when he joined ABC’s new talent programme in Hollywood. He did various jobs to support himself when establishing his acting career. His first television appearance was in Quiet Victory (1988).

Kyle Chandler then appeared in eight episodes television series Tour of Duty, a series about American soldiers in the Vietnam War. His first film role was in Pure Country (1992). He also played the role of Jeff Metcalf in 42 episodes of the television series Homefront (1991-1993). Metcalf was a man who could predict the future. Chandler made his Broadway debut in 1994 in Picnic at the Roundabout Theatre Company.

Kyle Chandler married Katherine Macquarrie in 1995, and the couple has two children Sawyer and Sydney.