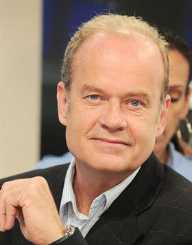 Allen Kelsey Grammer was born on February 21, 1955, in Charlotte Amalie, Saint Thomas, U.S. Virgin Islands. His parents, mother Sally and father Frank Allen Grammer, Jr. were both musicians and possessed a coffee shop, bar-cum-grill called Greer's Place. His parents divorced when he was two years old. Their mother and grandfather raised Grammer and his younger sister Karen. His grandfather died when he was 11 years old. Two years after the death of his grandfather, in 1968, his father was murdered.

Following these unfortunate and devastating incidents, Kelsey Grammer grew up in New Jersey and Florida. He received his school education in a private preparatory school called Pine Crest School situated in Fort Lauderdale, Florida. He began acting during his high school days and was encouraged by his teachers to pursue acting as a career option. Accordingly, he joined the Juilliard School in New York City to study drama and learn acting. Two years later, he left Juilliard in search of a stage career.

Kelsey Grammer joined the Old Globe Theatre in San Diego with a three-year internship contract after leaving Juilliard. He appeared in plays by William Shakespeare, and George Bernard Shaw staged by the Theatre Company. In 1980, he had a brief stint at the Guthrie Theater in Minneapolis, Minnesota. He portrayed the character of "Lennox" in Macbeth in his Broadway debut in 1981. He also appeared as Michael Cassio in a Broadway revival of Othello in 1982.

Kelsey Grammer acted in regional theatres and performed throughout the United States. His Off-Broadway productions include ‘Sunday in the Park with George,' ‘Plenty,' ‘A Month in the Country' and Quartermaine's ‘Terms.' On April 18, 2010, he made his Broadway musical debut playing the role of Georges in the musical La Cage aux Folles. He was nominated for a Tony Award for Best Performance by a Leading Actor in a Musical for his role in it.

During the early 1980s, Kelsey Grammer started his television career playing the role of Stephen Smith in the NBC miniseries ‘Kennedy.’ Besides, he acted in the television daytime dramas like ‘One Life to Live,' ‘Guiding Light' and ‘Another World'. In 1984, he landed the role of psychiatrist Dr. Frasier Crane on the NBC sitcoms ‘Cheers'. Grammer's characterization of Dr. Frasier Crane who was Shelley Long's pompous, self-absorbed love interest gained immense popularity, and his character became a regular instead of what was supposed to be a six-episode job.

The character of Dr. Frasier Crane became the central character of the spin-off ‘Frasier’ in the following year, which eventually became one of the most successful spin-offs in TV history. ‘Cheers' aired until 1993 and ‘Frasier' was launched in the following season. Kelsey Grammer won the Emmy Award for outstanding lead actor in a comedy series in 1994, 1995, and 1998 for his portrayal of the character of Dr. Frasier. He also won the Golden Globe Award twice in 1995 and 2000 for Best Actor in a Television Series for his acting in ‘Frasier.'

In addition to acting, Kelsey Grammer also donned the hat of a director in more than 30 episodes, particularly, in the second half of the series. Frasier was last aired in 2004 after an unbeaten run of 11 years. Grammer happened to sing the closing theme "Tossed Salads and Scrambled Eggs."

From 2007 to 2008, Kelsey Grammer appeared in a Fox series sitcom ‘Back to You' along with sitcom veteran Patricia Heaton. The show went off the air after only one season citing poor viewership. Grammer’s velvety smooth voice and his mid-Atlantic accent made him a popular choice for a voice-over artist. He bagged some memorable voice-over roles during his distinguished career.

In 1990, Kelsey Grammer provided the voice of Sideshow Bob on the animated series ‘The Simpsons.' The character's antics always trying to bring harm to the Simpson family was highly popular along with the amusement the voice of Grammer brought to the series. Grammer lent his voice to numerous other characters in animated movies. Notable among these are ‘Toy Story 2’ (1999), ‘Legends of Oz: Dorothy's Return’ (2013) and ‘Storks’ (2016).

In a bid to resurrect his sagging acting career, Kelsey Grammer starred in the Starz drama series ‘Boss’ as a fictional mayor of Chicago during 2011-12. The characterization of a dishonest politician won him rich accolades, and at the 2012 Golden Globe Awards, Grammer won the award for Best Actor in a Television Series Drama for his role in Boss. The show was concluded after 18 episodes spanning two seasons.

Apart from lending his voice to the animated characters, his silky voice also featured in many commercials. Kelsey Grammer played the voice of the wolf in Little Red Riding Hood in the 1998 ad for Honey Nut Cheerios. He also provided the voice for television commercials advertising the automobile giant Hyundai.

Kelsey Grammer got married four times. He has seven children and one grandchild as of 2016. His first daughter Spencer was from his first marriage with dance instructor Doreen Alderman, whom he married in 1982 and was subsequently divorced in 1990. Tragedy Struck Kelsey Grammer on July 1, 1975, when his younger sister Karen Grammer was abducted, raped and murdered. He named her first daughter Spencer Karen Grammer in his sister's memory.

Kelsey Grammer was in a relationship with hair and makeup stylist Barrie Buckner after his divorce from the first marriage. He has a daughter Kandace Greer Grammer from his relationship with Buckner. The couple split months afterward. In September 1992, he married former exotic dancer Leigh-Anne Cushany. The couple divorced as early as in 1993.

In August 1997, Grammer tied the nuptial knot for the third time with former Playboy model and dancer Camille Donatacci. The couple has a daughter and a son from the marriage. On February 10, 2011, their marriage was annulled through the divorce. Two weeks after the finalization of Grammer's third divorce involving Camille, Grammer married girlfriend Kayte Walsh, a British flight attendant 25 years younger than him. The marriage was solemnized at The Plaza Hotel in New York City on February 25, 2011. The couple is blessed with one daughter and two sons.