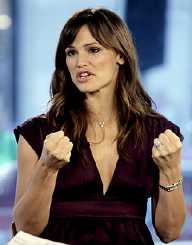 Jennifer Garner is an American actress and movie producer. She has worked in many movies since her breakthrough film in around 1972, with performances in series `Alias’ steering her to fame, of which she won her first Golden Globe award. By then, she had made her presence known and was taken up for cameo appearances in various Hollywood films.

More so, Jennifer got roles in movies like `Daredevil’ which were crucial to her career breakthrough. Garner has a charming and simple depiction of her characters that earn her much love and admiration from fans all over. Also, she is also an activist for education and an advocate for anti-paparazzi campaigns against celebrities children.

Jennifer Anne Garner was born on 17th April 1972, in Houston, Texas. Her parents were William John Garner and Patricia Ann. William was a chemical engineer working for Union Carbide while Patricia worked as a teacher in Oklahoma. The family consists of two other siblings, Melissa Wylie and Susannah.

Jennifer was brought up in Princeton and Charleston West Virginia. Their parents were very conservative and attended church regularly.  Jennifer drew much of her early inspiration from her older sister and looked up to her. As kids, the daughters were required to take musical instrument lessons, specifically Piano and Saxophone.

Jennifer Garner attained her high school education at George Washington School, completing her studies in 1990. While there, she played the Saxophone in the school band, was an avid reader and was on the school’s swimming team.

Later, she joined Denison University and earned a Bachelor of fine arts degree in Drama. More so, she studied at National theatre institute and The Eugene O’Neill Theatre Center. From an early age, Jennifer did not have acting ambitions and was not planning on following that career path.

Jennifer Garner’s acting career kicked off at around 1994, whereby she worked in Shakespeare plays by Atlanta productions. Examples of these plays were `Merchant of Venice’ and `A Midsummer Night’s dream.’ She worked in a lot in theatres at this time in New York, i.e., for Roundabout Theatre Company.

Garner’s television debut was in film Zoya. After that, she starred briefly in series like `Spin City,’ `law and order’ and `Time of your life.’ Her relatively big break came by a bit later in 1998, when she landed a role in series `Felicity.’  In the year 2000, Garner featured in two films, `Dude Where is My Car’ and `Pearl Harbour.’  Producer JJ Abrams in series ‘Felicity’ approached her in 2001, offering her a role in an upcoming series `Alias.’ The series was an action movie and involved some fighting skills, which she did not possess.

Due to this, Garner enrolled for some Taekwondo lessons for about a month to be ready for the auditions. The series was successful from its initial episodes, enjoying a large number of viewers. Garner earned a salary ranging $40,000-$150,000 in a single episode. More so, she bagged many awards due to the series, including Best actress by Golden Globe awards.

In addition to her acting in `Alias,’ Jennifer Garner produced an episode named `In dreams.’ In 2002, she made a cameo appearance in the film `Catch me if you can’ which starred the likes of Leonardo Di Caprio and Tom Hanks. The next year, she got a role in movie `Daredevil,’ and her character was Ben Affleck’s love interest.

By then, she had gained a lot of media accolades and recognition from her movie roles. Due to this, she was offered a lead in movie `13 going on 30’ in 2013’ and had eye-catching performances. In around 2006, her prominent roles in movies continued with movies like; `The Kingdom,’ `Catch and Release,’ and `Juno.’ In the year 2007, she worked on her first Broadway film named `Cyrano de Bergerac.’

In 2010, Jennifer Garner in association with a major star cast including the likes of Jessica Alba acted a romantic comedy named `Valentine’s day.’ Her next movies included `Arthur’ and `The Odd Life of Timothy Green’ in 2011 and 2012. Some of her recent projects include are `Draft day’ and `Dallas Buyers Club.’

Jennifer Garner got married to Scott Foley in 2000, a fellow cast on series Felicity but they got divorced in 2004. She dated her co-star Michael Vartan briefly and later dated Ben Affleck. Her relationship with Affleck worked out, and they got married on June 29, 2005. They have three children together, namely Violet, Seraphina Rose and Samuel. The couple, however, announced divorce in 2015.