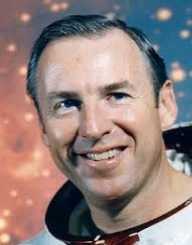 He is famously known as the chief of command of the failed Apollo 13 mission to the moon. He was also the commander of the Apollo 8 which became the first space to enter the lunar orbit.

Apart from Apollo 8 and Apollo 13, he is known to have had flights on Gemini 7 and Gemini 12. He is the first person to have had two trips to the moon without establishing a landing. He has received the Congressional Space Medal of Honor among other honors.

James Arthur Lovell Jr. was born on March 25, 1928, in Cleveland, Ohio, the U.S. In 1933, his father died in a car accident forcing him, and his mother moves to Terre Haute, Indiana to live with a relative.

They later moved to Milwaukee, Wisconsin, and attended Juneau High School from where he graduated. As a boy, he fancied rockets and had created several flying models.

In 1946, he enrolled at the University of Wisconsin–Madison and graduated two years later in 1948. He joined the United States Naval Academy in 1948 and later took four years at Annapolis. He received his B.S degree from Annapolis in 1952 and attended flight training at NAS Pensacola completing in February 1954.

As a certified Naval Aviator, James A. Lovell Jr. started as an assigned pilot for the VC-3 at Moffett Field near San Francisco, California. For two years he took flights on F2H-3 Banshee until 1956 and in 1958 began advanced pilot training at Naval Air Test Center. During his six months of training, he studied alongside Charles (Peter) Conrad and Wally Schirra and was the first to graduate.

In late 1958, Lovell and his two classmates were selected for the Project Mercury as potential astronauts.  However, he did not qualify due to health conditions. In 1962, he was accepted into the NASA Astronaut Group 2 together with his former classmate Conrad to form ‘The New Nine.’ As a NASA astronaut, Lovell had flights on Gemini 4 as co-pilot and the 1965 Gemini 7 under Frank Borman.

James A. Lovell Jr.'s later flights as back up pilot included the Gemini 10 and Gemini 9A serving as back up commander in the latter. In 1966, he had his first command in the Gemini 12 which proved successful and paved way to launch the Apollo missions.

He began his flight on the Apollo 9 alongside the commanding pilot Neil Armstrong. Apollo 9 was replaced by Apollo 8 with Lovell and Anders on board as the first men to travel to the moon on December 21, 1968.

In 1973, James Arthur Lovell retired from the US Navy and was appointed CEO of Bay-Houston Towing Company in 1975. He served as the president of Fisk Telephone Systems in 1977 before taking up a job at Center as vice president.

After his retirement from Central in 1991, he served as the President of the National Eagle Scout Association.  He also served in several organizations including Federal Signal Corporation in Chicago (1984–2003) and Astronautics Corporation of America in Milwaukee (1990–1999).

In 1952 James A. Lovell Jr. married Marilyn Lillie Gerlach and together has four children Barbara, James, Susan, and Jeffrey. He was inducted into the United States Astronaut Hall of Fame on March 19, 1993. He is currently ninety years old.