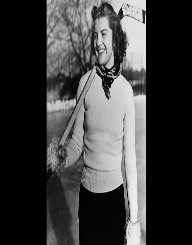 Betty Ford was born on 8th April 1918, to William and Hortense Bloomer. She was born in Chicago, Illinois, in the United States. Ford was the youngest of three children, with two older brothers. She was called Betty Ford from a young age.

The family moved to Denver in Colorado for a brief period, and then to Grand Rapids in Michigan.

Betty Ford started earning money from the young age of 11. She taught children how to dance, and she was a clothing model. Ford also worked with children that had disabilities at the Mary Free Bed Home for Crippled Children.

After graduation, Ford enrolled at the Bennington School of Dance in Vermont. One of her choreographers, Martha Graham, accepted her as a student. Ford moved to New York City to study dance and worked as a fashion model which financed her studies.

Betty Ford's mother didn’t approve of her dancing career, so Betty Ford moved home for six months. It was agreed that if she wanted to return to New York after that time that she could. As it turned out, Ford stayed at home and didn’t go back to New York.

Betty Ford married William G. Warren in 1942. He was an insurance salesman, and Betty Ford had known him most of her life. Due to his work, the couple moved frequently. They eventually returned home. Warren was an alcoholic and went into a coma soon after Ford filed for divorce. Her sense of duty had her stay with him another two years to look after him. Their divorce finalized in 1947.

In 1948, she married Gerald Ford. Gerald was a lawyer and a veteran of World War II. He was running for a seat in the U.S. House of Representatives when they met. The couple would have four children – three sons and a daughter.

The Fords moved to Washington, D.C., and lived there for over 20 years. Gerald rose through the ranks over the years until he became the highest-ranking Republican. When the Vice President resigned in 1973, Gerald was appointed to the role.

In 1974, he would become President. The president of the time, Richard Nixon, resigned amid a scandal called “Watergate”. Her husband, Gerald, was President of the United States from 1974 to 1977.

Betty Ford was very popular with the people as the First Lady, and she remained so the whole time her husband was in office. She was very progressive and liberal-thinking on many issues. Ford spoke on just about every hot topic of the day.

She was a keen activist for the Equal Rights Amendment (ERA), pro-choice on abortion, and the Women’s Movement.

After The White House

Betty Ford was the first First Lady that came forward to announce her addiction to alcohol and substance abuse in the late 1970s. Her family helped her through until she was recovered in the early 1980s.

She also had a mastectomy in 1974 and spoke openly about it to the American people, which helped raise awareness during a period when breast cancer wasn’t openly discussed.

After leaving the White House, Ford continued to raise awareness for the ERA and the feminist movement, a cause close to her heart, for the rest of her life.

Ford wrote three books. The first was called The Times of My Life and was released in 1978. The second was Betty – A Glad Awakening (1987) and the third was Healing and Hope – Six Women from the Betty Ford Center Share Their Powerful Journeys of Addiction and Recovery (2003).

Among her awards and honors are the following:

Betty Ford established the Betty Ford Center for substance abuse and addiction. She served as the first Chair of the Board of Directors.