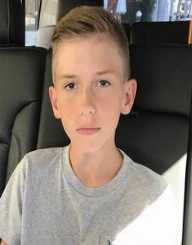 Grayson Chrisley was born on May 16, 2006, in Georgia. His parents are the famous reality stars, Todd and Julie Chrisley. He has four older siblings, Savannah, Chase, Kyle, and Lindsie.

Grayson Chrisley is the youngest child in the Chrisley family. All of his siblings are much older than him, with his closest in age sister, Savannah, who is nine years older than him. Grayson has the most intimate relationship with his sister Savannah. His family is made up of a group of wealthy American southerners who are full of charm and drama to boot.

Grayson Chrisley first entered the spotlight when his family began to star in their reality show, Chrisley Knows Best. Grayson was only seven years old when the show premiered, which made him quite a young star. The show changed Grayson’s life quickly, but he was able to adapt to all of the changes just as well as his adult siblings.

On the show, he makes a name for himself by being cute and funny on camera. He can be seen playing around and even poking fun at his older siblings! Fans of the show can hardly find a flaw with the youngest Chrisley child.

The show has had four seasons and is shown on the USA Network (and on ITVBe in the UK). The show is expected to have more seasons in the future, even though some people, like Chloe Chrisley (Todd’s granddaughter and Grayson’s niece), will not be on the show in future seasons.

The fifth season of the show is already expected to be released sometime in early 2017. Aside from all of its seasons, the show also has two specials, A Very Chrisley Christmas and A Very Chrisley Christmas 2. Even with the show’s continuing seasons, many viewers and critics still have mixed feelings about the show. Some say that it is more like a sitcom than reality, but others love the charm of the family (which Grayson no doubt contributes to).

Aside from being on his family’s reality TV show, Grayson Chrisley also had a small role in the science fiction movie, Sharknado: The 4th Awakens in 2016. Grayson hopes to continue acting and to one day make it big as a Hollywood movie star.

Grayson has also appeared himself in three other television shows: The Real, Steve Harvey, and WWE Raw.

Besides his fame, Grayson Chrisley is just an average kid. He goes to an ordinary school, and he works hard on his studies, making him one of the brightest kids in his class. Being on his family’s reality show has taught him how to deal with stressful situations, which helps to make other parts of his life easier to deal with. Grayson also loves to play sports at school and home; football is one of his favorites! He doesn’t let his family’s fame and fortune get to his head even though his family does spoil him a little bit. Instead, he plays around just like any other kid.