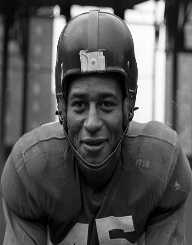 Emlen LewisTunnell was born on March 29th, in 1925. His place of birth was in Bryn Mawr, Pennsylvania. He was however raised in Garrett Hill around Radnor Township. Tunnell’s mother was a homemaker. His father left them when he was a toddler. As a result, he alongside his other three siblings were raised by his mother.

Tunnell joined Radnor High School where he began playing football. He played the position of star halfback both in 1940 and in 1941. His exceptional performance on the pitch landed him in the school’s hall of fame.

Concerning his college education, he joined the University of Toledo. He continued honing his football talent here as he joined the school’s team called Toledo Rockets. Unfortunately, Tunnell suffered a neck injury in October 1942.

Owing to the injury that Tunnell suffered in 1942. This created a lot of issues during the World War II draft into the army. Therefore, he simply joined the United States Coast Guard (USCG) in May 1943.

The following year, Tunnell played for the San Francisco Coast Guard Pilots team as a halfback. In November 11th, 1944, he helped his team defeat the Pacific Tiger’s team that was coached by Amos Alonzo Stagg. By the end of this year, Tunnell managed to earn a position with the All-Pacific Coast Service team.

In April 1946, Tunnell terminated his services with the Coast Guard. Thereafter, he joined the University of Iowa and played for the school’s football team during that season. He demonstrated his skills on the pitch and by the end of the season, he was ranked second best in the team.

Two years later, in 1948, Tunnell joined The New York Giants. This was a major breakthrough in this professional career as a football player. After being signed by the Giants, he earned immense recognition for he was the first African American player to be signed to the team. He played for the team for about 11 years and left the team in 1958. After this, he went ahead and joined the Green Bay Packers.

In 1962 Tunnell wedded Patricia Dawkins. Unfortunately, the couple had no children together.

EmlenTunnell died on July 23rd, in 1975. He was 50 years old when he passed away. He suffered a heart attack which led to his early demise.