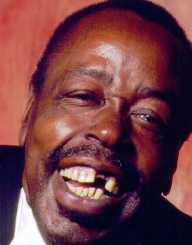 Carey Bell Harrington was born 14th November 1936 in Macon, Mississippi, in the United States. Bell loved music from a young age, in particular, Louis Jordan. Although he would have loved a saxophone to be like Jordan, the best Bell’s family could do was a harmonica. He taught himself to play the harmonica, and he was proficient by the age of eight. He soon became interested in the harmonica greats of his era including Big Walter Horton and Sonny Boy Williamson I and II, and he learned from watching and listening to them.

Bell joined a blues band belonging to one of his relatives, Lovie Lee when he was just 13.

When Carey Bell was 20, he travelled to Chicago with Lee. He met Little Walter, one of the harmonica players he aspired to, and learned how to play the harp. Bell also learned to play the electric bass because he thought it would improve his employment opportunities. When he arrived in Chicago, the electric guitar was becoming the instrument of choice for blues players. Although Bell had learned the harp from the best in the industry, it did not help him much as the harp was going out of style.

Through the 1960s, Bell played for several bands as a bassist. In 1969, he joined the American Folk Blues Festival and toured through Europe and the UK with them. He released his debut album, Carey Bell’s Blues Harp, in 1969. He recorded with Delmark Records, based in Chicago.

As well as recording his albums, Carey Bell collaborated with other artists like Muddy Waters, Willie Dixon, and Big Walter Horton, and regularly recorded on many albums.

Bell toured and recorded during the 1980s, and in 1990 he recorded an album called Harp Attack! with other artists including Junior Wells, Billy Branch, and James Cotton. The album was recorded with Alligator. It became one of the top selling albums on the Alligator label. He released his first solo album with Alligator in 1995, called, Deep Down. Although he released further albums with Alligator, Bell’s final album was released in 2007 by Delmark Records.

Carey Bell released 17 of his albums between 1969 and 2007. During the same period, he was on 11 albums where he collaborated with other artists, and six albums with Louisiana Red. He was recognized as one of the best blues harpists of his era.