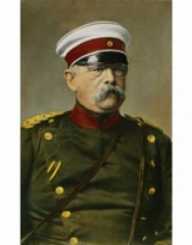 The Iron Chancellor Otto Eduard Leopold von Bismarck was born on April 1, 1815, in West Berlin. His father was a Prussian landowning nobleman, and his mother came from a long line of successful academics and government ministers.

Bismarck received his education in Berlina and after finishing his studies at the university took several minor diplomatic posts. When he was 24 years old, he retired from diplomatic work and returned to his family estate in Kneiphof. In 1847, Bismarck got married and went to Berlin as one of the delegates of Prussian parliament. He became widely known as the voice against the liberal, anti-autocratic Revolutions in 1848.

In 1851, Bismarck began to serve as ambassador. Until 1862, he served as the ambassador at the German Confederation in Frankfurt, in St. Petersburg, and in Paris. This experience was crucial for developing his insight into the vulnerabilities of Europe’s most significant powers.

In 1861, William I became the King of Prussia and appointed Bismarck as the chief minister in 1862. Bismarck was the man in charge of Prussia and often manipulated the king. In 1864, he began a series of wars to establish the Prussian power in Europe. Firstly he attacked Denmark and obtained the German-speaking territories of Schleswig-Holstein. In 1866, his actions led to the start of the Austro-Prussian war, which ended with the defeat of Austrian empire.

During the Franco-Prussian War of 1870-71, Bismarck saw the opportunity to unify the loose confederations of Germany against outside enemies. He stirred tensions between France and Prussia, making both countries insecure about each other. France declared war, but Prussian and their German allies won the war. Prussia then annexed France's border provinces Alsace and Lorraine. William I was crowned the emperor of a unified Germany, The Second Reich.

When Germany became unified, William I and Bismarck began to work on strengthening the domestic power. During the 1970s, Bismarck spent most of his time in the cultural struggle against Catholics. The country was made up of 36% Catholics, and Bismarck began to place parochial schools under state control and expelled Jesuits.

In the 1880s, Bismarck focused on social issues. He established the national healthcare in 1883, accident insurance in 1884 and old age pensions in 1889. In 1885, he hosted the Berlin Conference, thus ending the conflict in Africa, which was divided by European powers. Germany established colonies in Cameroon, Togoland, East Africa and Southwest Africa.

William I died in 1888, and he was succeeded by Frederick III and later, William II. Both rulers were difficult for Bismarck to control and in 1890, he was forced out of the ruling. William II controlled the flourishing state, but could not maintain Bismarck’s balance of international rivalries. He was and continues to be celebrated by political leaders calling for strong German leadership. Bismarck died in 1898.