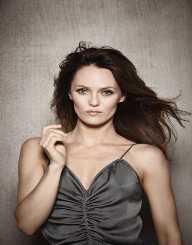 Vanessa Paradis is a French singer as well as a model who began her entertainment career at a very tender age. She is known to have started her professional career at the age of 8 by singing on one of the famous French TV programs. She later released her hit single Joe Le Taxi at the age of 14. The hit result in a release of her first album, M&J which made waves in France and had access to UK market. She had a door opened for her in modeling with her instant success in music. She also ventured into an acting career.

Vanessa Paradis has been the face of Chanel for many years, and her first advert was for Fragrance Coco. With this, she earned a lot of projects. She is presently the spokesmodel for both Chanel and Miu Miu. She has the opportunity of starring in numerous French movies which include une chance surdeux, café de Flore, among others. She has won several accolades as well as awards for her acting prowess.

Vanessa Paradis was born in Saint-Maur-des-Fosses, France on December 22, 1972, to Andre and CorineeParadis. Her parents were interior designers. She, however, developed a great interest in singing at a very early stage of her life. She eventually started singing at the age of 8 before being taken to the famous TV Show, L’ecole Des Fans (The School of Fans) by his uncle, a record producer.

Vanessa Paradis recorded her first single, La Magie des surprises-parties in 1983 while she was 11 years old. This single got her the opportunity to perform at the Italian festival some years later. She later brought out her first album, Joe le Taxi which became an international hit. This album was the no. 1 in France for 11 weeks. She also came up with her debut album, M&J, while she was 14 years old. She later left school for her career in the late 1980s. She was the intention of putting her best in her career to be more successful. Vanessa Paradis released Variations Sur le meme t’aime and acted in Noce Blanche in 1990. At that period, she won a Caesar Award.

She became the face of ofChanel’s Fragrance in 1990 wearing a black feathered costume for the advert. Vanessa Paradis was very famous with the black advert which was shot by Jean-Paul Goude. Later in 1992, she moved to America with the intention of working on her next album which was to be in English. She worked with Lenny Kravitz and titled the album, Vanessa Paradis. The album topped the French charts and made it to the UK listings.

Vanessa Paradis later spent years touring the around the world performing live. It was during that period that she released her five live alba, Live. She titled her tour, National High Tour and she was able to tour England, France, and Canada. The 1990s was a decade of Paradis’ acting career as she worked on different movies which include Un Amour de Sorciere, Une Chance Sur Deux, and La FilleSurLe Pont.

Vanessa Paradis later released her new album, Divinidylle after modeling for the Chanel for a bit in the early 2000s. The new album was released in the UK, and she won two awards for the album. She later released an acoustic album before starring in the café de Florein 2011. Soon, she produced a song, love songs with Benjamin Biolay in 2013. The writing of the album was contributed by different people like Biolay, MickaelFurnon, among others.

Vanessa Paradis is very successful as both a singer and an actor. She is known to have released six albums while love songs are her latest album. She has also acted in eighteen movies starring in some. Awards also have been given to her for her memorable performances.

Vanessa Paradis has won a lot of awards with her music and acting career. She is known to have won the Caesar Awards, Prix Romy Schneider, Genie Award, Jutra Award, Cabourg Romantic Film Festival Award, etc. She is also known to have won 6 Victoire de la Musique Awards. She was also honored with Order des Arts et des Lettres.

Vanessa Paradis dated some celebrities. She is known to have dated the French singer, Florent Pagny between 1988 and 1991. She also dated Lenny Kravitz and Stanislas Merhar after that. Later on, she went into a relationship with Jonny Depp between 1998 and 2012. The two had two children- a son and a daughter. Currently, she is in a relationship with Benjamin Biolay, a French singer.