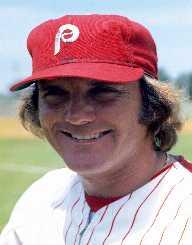 The famous baseball player Tug McGraw is remembered for his phrase ‘Ya Gotta Believe.' He is the father of Tum McGraw, the American country musician. McGraw became the last baseball major league player to play under Casey Stengel.

Frank Edwin "Tug" McGraw, Jr. was born on 30th August 1944 to Mable McKenna and Sr. Frank Edwin McGraw. He got his nickname ‘Tug' from his mother because of his way of breastfeeding.

The family lived in a working-class neighborhood in San Francisco. During his childhood, his athletic body suited most sports and was often spoilt for choice on which sport to take.

In 1962, Tug McGraw graduated from St. Vincent Ferrer High School in California. He immediately signed a contract with Solano Community College as a free agent.

He spent one year playing in the minor league. In 1965, He made his the big league debut as a relief pitcher. Despite a show of some promise, he finished the league with a poor record of 2-7.

After a poor season with the Mets, he joined the Marines in Paris Island. In the marine, McGraw claimed that he trained as a killer. McGraw later claimed that the most challenging thing in the Marines was not the training but the conflict within him.

After moving to the National League, the Mets led the standings for the first time in 1969. It was the best record of the team's history.

In the playoffs, the team carried on their form to the playoff knocking out Atlanta Baltimore and Braves. The team won the first ever National league championship.

The rise of the Mets gave a chance to Tug McGraw to show his talent in the highest level. His pitching improved and he became the Mets most valuable player. Mets lost the 1979 championship by a whisker. During that season, McGraw became the fan favorite.

His way of inspiring the team with the phrase 'Ya Gotta Believe' became the team’s signature phrase. His consistent performance enabled the team to win a number of championships.

The team won the National League East Division for three consecutive seasons. The titles came in 1976, 1977 and 1978. It, however, lost in the playoffs in each of those seasons.

The team's most significant achievement came in 1980. The team won their first ever World Series title. In an individual level, he won the player of the season award.

After 19 seasons in the top flight, Tug McGraw announced his retirement from Baseball in 1985. The day of his announcement was on Valentine's Day. He later said it was to signify the love he had for baseball. Upon his retirement from the game, he worked as an author, commentator and television personality. He fell ill in 1980; he underwent surgery to remove a brain tumor.

After the surgery, the doctors declared that McGraw only had 21 days to live. He, however, refused to accept the doctor's assessment. He later made the last visit to Shea Stadium in July 2003, and the fans gave him a standing ovation.

Tug McGraw finally succumbed to the brain tumor on 5th January 2004. Before his death, he founded the Tug McGraw Foundation. The foundation's aimed at helping brain tumor patients.

His son released a son Live Like You Were Dying, in honor of his father. The song later became a hit.