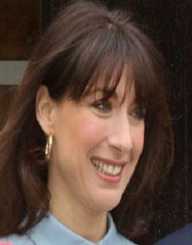 British businesswoman and wife of former British Prime Minister David Cameron, Samantha Cameron was born Samantha Gwendoline Sheffield on the 18 April 1971 in Paddington, London, England. She is the daughter of Sir Reginald Sheffield, 8th Baronet and Annabel Lucy Veronic Jones who married in 1969. Cameron has a sister Lucy (b.1973), Her parents divorced in 1974. Her mother later remarried and Cameron was raised at
Normanby Hall, an estate in North Lincolnshire.

Cameron was educated at Marlborough College. She then did an arts course at Camberwell College of Arts before doing a fine arts degree at the School of Creative Arts at the University of the West of England.

Career
Samantha Cameron worked as a director of  Smythson of Bond Street in London. After her husband became Prime Minister (2010-2016), she resigned from fulltime work but continued in a consultancy role with Smythson of Bond Street. She also worked for the fashion house, Shiatzy Chen. In 2016, Cameron founded an upmarket clothing brand Cefinn which now ships to 26 countries.  Backers include Ventex, Wendy Yu of Yu Holdings in Hong Hong, entrepreneur David Brownlow's Havisham Investments and Philip Basset, who founded Brightwell Partners, an investment firm.

Samantha Cameron has been actively involved in various charitable causes and events including Dress for Success, a non-profit organisation assisting unemployed women to look their best at interviews by providing free clothes and support. She is the patron of Vitalise (2013) and is an ambassador for Save the Children. She also represents the British Fashion Council.