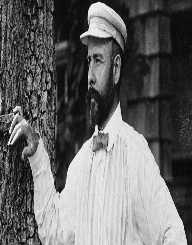 Louis Sullivan was born on 3rd September 1856, to Patrick and Andrienne Sullivan. His parents were immigrants to the United States. Arriving separately, they met and then married in 1852. Louis  Sullivan's father was a dance master. Sullivan had one sibling, and older brother called Albert.

Sullivan’s moved to Chicago in 1869, but Sullivan stayed behind in Boston, living with his grandparents on their farm. He commuted to school each day in Boston.

As a teenager, at the age of 16, Sullivan began schooling at the Massachusetts Institute of Technology, studying architecture. He studied for a year, after which time he moved to Philadelphia, where he began his career.

He worked for William LeBaron Jenney in Chicago. Jenney was credited for the first steel frame building.

Sullivan didn’t even last a year with Jenney. He moved to Paris, and took up study once again, at the Ecole des Beaux-Arts, where he studied for 12 months. He returned to Chicago after the 12 months and found work with a company called Joseph S. Johnston & John Edelman. He was hired as a draftsman.

In 1879, Sullivan was hired by Dankmar Adler. Within 12 months, he had become a partner in the company. From 1879 through to 1889, the firm became very well known for their theatre architecture. In 1886 they were commissioned to build the Auditorium Building in Chicago, which was completed in 1889. It was a mixed purpose complex, with an opera theatre seating approximately 4,000, a hotel, and a 17-storey office tower.

After completion of the Auditorium Building, the firm moved into its office architecture phase, becoming famous for many of the buildings they designed.

When the depression hit in 1893, work slowed down considerably, and in 1895, Louis  Sullivan’s partner, Adler, took a job elsewhere. Sullivan had a huge argument with Adler, and the pair didn’t talk for many years.

Sullivan pressed on alone, but work was sparse and the next 30 or so years were very unproductive for him, completing only about 20 commissions during that period. Some of his commissions were banks, although these were attributed to his employee at the time, Elmslie. He became a recluse and spent a lot of time writing and also at his winter cottage which was located in Ocean Springs.

With his income declining, Sullivan eventually had to leave his offices in the Auditorium. By 1920 he had no office and was living in one bedroom, with the help of friends. He managed to get himself a desk at the offices of a company in Chicago and wrote his two great works, his autobiography, titled, “The Autobiography of an Idea,” and also “19 Plates For A System of Architectural Ornament According with a Philosophy of Man’s Powers”.

In a cruel twist of fate, he died just one week after receiving published copies of his two works.

1844:  Sullivan was only the second architect to be awarded the AIA Gold Medal (American Institute of Architects) posthumously, for his contribution to American architecture.

Louis Sullivan married Margaret Hattabough in 1899. They were separated in 1906, and divorced later on in 1917. The couple didn’t have any children.

During the late 1880s, steel was becoming very popular with the age of industrialization. Louis Sullivan made the most of this and began using steel to design his buildings. Buildings could be built taller because the steel made them more stable, there was more floor space because the inner walls were thinner, and due to the structural stability, larger windows could be used, which meant more natural light. It was during this period Sullivan earned his nickname, ‘The Father of Skyscrapers”.

Sullivan’s legacy is in his major works. Some of his more notable designs are the Wainwright Building in St. Louis, the Chicago Stock Exchange Building, the Prudential Building in New York (formerly the Guaranty Building) and the Carson Pirie Scott Department Store in Chicago.

The interior of the Auditorium Building was refurbished in 1967 and restored to its former glory, a masterpiece for all to see.

Some of Sullivan’s works were destroyed over time, but thanks to a growing public outcry in the 1970s, works of architectural significance moved into the spotlight. Several significant works of Sullivan were saved by specific people who took it upon themselves to fight for the preservation of some of his more popular buildings and won.