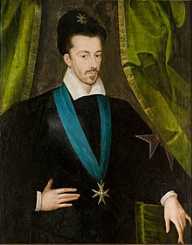 Henry III was the first French to rule over the Polish-Lithuanian Commonwealth. He was also the last French king of the Valois House to reign in Paris.

Henry III was born as Prince Alexander Edward of France in Paris on September 19, 1551. He was one of the nine children born in the royal family of King Henry II and his wife Queen Catherine de Medici. Following in royal traditions, Prince Edward of France was granted the titles Duke of Angouleme and Orleans in 1560. Six years later he became the Duke of Anjou.

He was an indoor person, unlike his other siblings. He liked art, reading and the sport of fencing. As the result of the motherly pampering, Prince Edward of France became rebellious. He even taunted the royal court with his Protestant tendencies in the deeply Roman Catholic family. He rescinded his actions after a stun intervention by his mother.

At the beginning of his youth, he joined the French military. His mother orchestrated his appointment as the leader of the royal forces. He successfully fought against the Protestants in two battles. In March 1569, he fought in the Battle of Jarnac. He again fought in the victorious Battle of Moncontour in October that year. He also participated in the onslaught against the Protestants in the St. Bartholomew Day Massacre in August 1572. He again led the French army in the war against La Rochelle in 1572 to 1573. Prince Edward cemented his reputation as the youthful military hero of the French kingdom.

When the Polish King Sigismund II Augustus died on July 7, 1572, he left no male child to inherit the throne. The French envoy to Poland suggested Prince Edward of France to inherit the Polish throne. In exchange, the French would offer financial and military support against the Russian and Ottoman empires. The Polish-Lithuanian nobles elected Prince Edward of France as the Polish King. He became the first elected monarch of the Commonwealth.

He was forced to sign into law the Henrician articles that gave religious tolerance to the citizens. Upon signing the law, he received his election certificate as the king on September 13, 1573, in Paris. He was crowned as the Polish king in the capital Krakow on February 21, 1574. Despite the culture shock, the young Polish king endeared himself to his subjects.

As the Polish king, Edward kept close diplomatic ties with his native France. On May 30, 1574, his elder brother Charles IX died in Paris leaving no heir apparent to the throne. Prince Edward left Poland for France to install himself as the French king.

On February 13, 1575, Prince Alexander Edward of France was crowned King Henry III of France to succeed his brother. In his liberal tendencies, he granted the Protestants religious freedom of worship in France. Since he was childless, the throne would move from the Valois nobility to the Bourbon nobility under King Henry of Navarre. King Henry III faced stiff resistance from the Catholic nobilities in Paris. A civil war broke out with Catholics against the Protestants.

On May 12, 1588, Henry the Duke of Guise led Paris against the authority of King Henry III. Duke Henry had the support of the Spanish monarch and the Pope in the Vatican. The revolt forced the king to flee into exile. King Henry returned to Paris after the Spanish army was defeated by the English in the Anglo-Spanish war of 1588.

King Henry was killed by a Catholic Dominican monk called Jacques Clement. On August 1, 1589, the monk requested to see the king. In his meeting with King Henry, Clement gave out a bundle of papers and requested to explain something in secret. The king summoned for privacy and Clement stabbed the king in the stomach. Clement was killed by the guards. The following day August 2, 1589, King Henry died. He was succeeded by King Henry of Navarre as King Henry IX of France.

Despite the celebrations that followed his death in Paris, historians now hail him as a progressive French king who transformed the kingdom into a liberal kingdom.