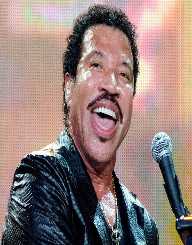 Lionel Brockman Richie, Jr. was born on June 20, 1949, in Tuskegee, Alabama. He went to Joliet Township High School and was a star tennis player. His talent led him to receive a tennis scholarship to Tuskegee Institute.
After his sophomore year, Richie dropped out of the Institute. He considered studying divinity and becoming a priest in Episcopal Church. He finally decided that he is not meant for the job and instead pursued a career in music.

While in Tuskegee, Richie had formed several R&B groups. In 1969, he started the Commodores band, where he was the singer and saxophonist. The band signed a recording contract with Atlantic Records and released one record, later moving to Motown Records. The band was initially a supporting act to The Jackson 5, but soon became established as a popular soul band. Their first singles were filled with dance and funky sound, but Richie later started to write and sing more romantic songs, like his hit “Three Times a Lady.”

Richie also started to write songs for other artists, like Kenny Rogers. He also performed the theme song for movie Endless Love in 1981, together with Diana Ross. The song was majorly successful all over the world, and Richie was inspired to start his solo career.

In 1982, Richie released his debut album Lionel Richie which became a hit on the Billboard U.S. charts. The ballad from the album, “Truly” won Richie a Grammy Award for best male pop vocal performance.

His next album Can’t Slow Down was released in 1984. Most popular hits from the album were “All Night Long” and the ballad “Hello.” This project won Richie a Grammy Award for best album of the year. Richie performed “All Night Long” at the closing ceremony of 1984 Olympic Games in Los Angeles.

Richie helped Michael Jackson to co-write the famine relief song We Are The World in 1985. His next album was released in 1986 and sold more than 4 million copies. After the release of his album, Richie suffered through a series of personal troubles and disappeared from the music scene. He only returned to music in 1996 with his album Louder Than Words.

Richie headlined the 2000 Fourth of July concert at the Philadelphia Museum of Art. In 2006, he released his 8th studio album Coming home. The hit “I Call It Love” became his biggest hit in ten years.

In 2007, Richie made a surprise appearance on the Australian Idol show, performing “All Night Long.” The following year, Richie received George and Ira Gershwin Lifetime Achievement Award at UCLA. In 2012, Richie released his album Tuskegee which features 13 of his hit songs in a country style. In 2015, Richie performed at the Glastonbury Festival in England, followed by his return to the top of UK album charts.

Richie married his college sweetheart Brenda Harvey in 1975. The couple adopted Nicole Camille Escovedo, a daughter of one of his band members, who was two years old at the time. In 1986, despite him being married to Harvey, Richie began a relationship with Diane Alexander. He separated from Harvey in 1993.

Richie married Alexander in 1995. The couple had a son Miles and a daughter Sofia. Richie and Alexander ended their marriage in 2003. Nicole gave birth to her daughter Harlow in 2008, making Richie a grandfather. The following year, his grandson was born.

Richie is also an activist for breast cancer awareness and has raised $3.1 million for the Breast Cancer Research Foundation.