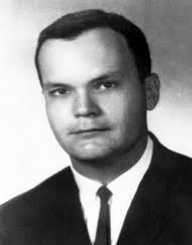 John Kennedy Toole was born on December 17, 1937, in New Orleans, Louisiana, United States. He was an American writer who wrote the Pulitzer Prize-winning novel 'A Confederacy of Dunces.' His other notable works include ‘The Neon Bible’ which received much praise from people. However, another set of people never appreciated his writings and even rejected them. This rejection sank him into depression, and he suffered from paranoia. He committed suicide on March 26, 1969, at the age of sixty nine.

John Kennedy Toole was born on December 17, 1937, in New Orleans, Louisiana, United States. He was the son of a car salesman John Dewey Toole Jr. and teacher Thelma Ducoing. He was a bright child who attained good grades in elementary school and excelled in academics. He skipped first grade and joined second grade at the age of six after passing an IQ test.

His mother exposed him to various stage productions by finding him a job as Mc on a child-focused show and also in modeling agencies. When he joined high school, he started focusing on academics more as his entertainment side slowly faded. He proved his intelligence even in high school as he excelled in his academics. He worked as an editor for his high school’s newspaper and gained much acclaimed including being named the Most Intelligent Senior Boy by the student body, selected to the National Honor Society and receiving the National Merit Scholarship.

As a senior, John Kennedy Toole wrote his first novel titled ‘The Neon Bible’ which adapted the Southern Gothic style. In 1954, he was granted full scholarship to study at Tulane University in the department of engineering. However, after a few weeks of study, he changed his mind to major in English against his father’s wish to study engineering. He graduated from Tulane University with honors in 1958 and received a Woodrow Wilson Fellowship to Columbia University where he studied English literature. He doubled his study schedules to obtain his masters within the same year.

John Kennedy Toole moved to New Orleans in 1959 where he started working as an assistant professor at Louisiana University. In 1960, he became the youngest professor serving at Hunter College in New York at only twenty two years. He enrolled at Columbia University once again to pursue a doctorate but dropped due to lack of motivation.

In 1961, he was enlisted for service in the United States Army and served for two years at Fort Buchanan in San Juan, Puerto Rico. He worked as an English tutor to recruits who spoke Spanish. He soon attained a higher rank as a sergeant and enjoyed the privilege of a private room. During his lone moments, he focused on writing and soon began working on a new project.

In 1963, John Kennedy Toole was granted a hardship discharge from the army and returned to New Orleans to take care of his parents who were faced with a financial crisis. He started working at Dominican College, a Catholic all-female school as a teacher to support his parents. With a slightly flexible teaching schedule at the college, he was able to create time to focus on his novel ‘A Confederacy of Dunces.’

In 1964 he embarked fully on writing, and after finishing the first manuscripts, he sent them to Simon & Schuster for review. However, the response from Simon & Schuster was not in favor of Kennedy’s opinion, and he took back the manuscripts in disappointment after it was finally rejected. His attempts to find a publisher for his works were unsuccessful, and he suffered paranoia and depression.

With the rejection of almost all his works John Kennedy Toole began drinking heavily and was constantly angered. He took a leave from teaching in 1968 and was replaced when he could not return to work. He became devastated with his condition and had financial problems which later led to having an altercation with his mother. He left home having gathered a few belongings and set on a journey in his car to California. On March 26, 1969, he was found dead in his car in Mississippi just outside Biloxi after he committed suicide. He died at the age of thirty one.