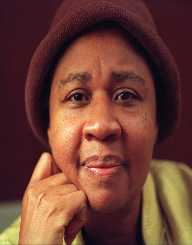 Jamaica Kincaid is an Antiguan-American essayist, novelist, and gardener and gardening writer.Jamaica Kincaid was born on May 25, 1949, in St John's, Antigua. Kincaid teaches at the University of Harvard as the "Professor of African and American Studies in Residence" during the academic year. She, however, lives in North Bennington, Vermont, during summers.

Jamaica Kincaid is an outstanding writer who has won several awards. Kincaid's work has been equally praised and criticised for having an angry tone. Jamaica's writing legacy is still on, and she has on several occasions, countered her critics by the fact that she writes guided by her personal experiences. Kincaid has written on topics such as mother-daughter relationships, the effects, and results of colonialism and general feelings of alienation.

Jamaica Kincaid was born in St John's, Antigua. She grew in a humble environment as her mother was a homemaker and a cultured homemaker while her stepfather was a carpenter. Jamaica Kincaid grew up in a very close relationship with her mother. When she was nine years, Kincaid's mother gave birth to her three brothers in quick succession until she felt neglected by her mother due to the enormous role she had for taking care of her younger brothers. The arrival of her brothers further strained their finances and life became difficult for her; the financial struggles coupled with a feeling of neglect weighed down on her.

Jamaica Kincaid's mother loved writing. She once wrote the story about Kincaid, narrated it to her and then gave it to her. The well-written piece made Kincaid develop a burning desire to become a writer.  Jamaica Kincaid grew up to be a brilliant girl despite the hostile environment. When Kincaid was sixteen years, her father became sick, and it became difficult for her mother to provide for the family. To make the matter worse, a baby brother was born, and this triggered her mother to withdraw her from school to help in supporting the family.

Kincaid went to New York when she was seventeen years to work as a casual laborer to support the family. Kincaid however disconnected herself from her family and returned to Antigua after 20 years.

Jamaica Kincaid acquired the British education system since Antigua was still a colony of British until 1981. Jamaica Kincaid was an intelligent girl who did well in her school work; she became top of their class on several occasions. Despite the top performance, her mother withdrew her from school when she was only sixteen years old.

While still working in New York, Jamaica Kincaid enrolled in evening classes at a community college. Kincaid later joined Franconia College in New Hampshire on a full scholarship. Kincaid, however, dropped out of school after one year and went back to New York.

Jamaica Kincaid started her writing career in New York after she dropped out of Franconia College. She began writing for a teenage girls' magazine and changed her name to Jamaica Kincaid in 1973 when her writing was first published. Kincaid's writing star shone brightly, and she got a job to write with The Village Voice and Ingénue. She also wrote short fiction stories that were published in The Paris Review and The New Yorker. She befriended George W.S Trow who was a veteran writer at The New Yorker column "The Talk of the Town" who introduced her to the magazine's editor, William Shawn, who was awed by her writing.

In 1976, Jamaica Kincaid was hired by The New Yorker as a staff writer and later as an author in the "Talk of the Town" for nine years. She resigned from The New Yorker in 1996 after the editor chose an actress Roseanne Bar to guest-edit an issue as the original feminist voice.Jamaica didn't like the direction of making the magazine celebrity-oriented as opposed to a literary one. A collection of 77 short stories that Jamaica Kincaid wrote for the New Yorker between 1974 and 1983 was published in 2001 as "Talk Stories."

Jamaica Kincaid started writing autobiographical novels that prioritized on "impressions and feelings over plot development." Extract from her book "A Small Place" was used as part of the narrative for a documentary named "Life and Debt" which was compiled by Stephanie Black in 2001. Jamaica Kincaid was appointed a visiting professor and creative writing's lecturer at the Harvard University. She is currently is a professor of Literature at "Claremont McKenna College," in California

Jamaica Kincaid was awarded an honorary degree of ‘Doctor of Humane Letters' from ‘Wesleyan University' during its 176th Commencement Exercises. Jamaica wrote the essay "A Small Piece" which brought out her discredit of corrupt leaders of the post-colonial regime in her motherland and the adverse effects it had on the common people of the land. In 1989, Jamaica Kincaid received the ‘Guggenheim Fellowship' to Assist Research and Artistic Creation.

Jamaica Kincaid received the ‘Anisfield-Wolf Book Award' for "The Autobiography of My Mother "published in 1997. In 1999, Jamaica Kincaid was awarded the ‘Lannan Literary Award for Fiction.'

Jamaica Kincaid has received significant criticism in his writing career.Jamaica has been accused of using an angry and insensitive tone in her novels. Peter Kurth said that Kincaid's "My Brother" was the most overrated in 1997. Dwight Garner also criticised her work heavily saying that her novel "See Now Then" was cheap and that any writer could write. He said that it had no moral issues to help the society.

Jamaica Kincaid worked in New York as an au pair and later became a secretary, model and a backup singer in New York. In 1970, Jamaica breached her hair, and she appeared a wild child in the New York City.

Jamaica Kincaid got married to Allen Shawn in 1979. They had two children together. They were blessed with their first born daughter, Annie, in 1985. Four years later, Jamaica became pregnant and gave birth to a son, Harold. The couple stayed together until 2002.