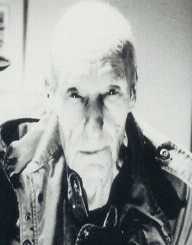 Born on January 19, 1916, Brion Gysin was a Canadian sound poet, writer, painter, and performance artist. Brion Gysin was known for what came to be the cut-up technique, which was used by the novelist William S. Burroughs. Brion Gysin also collaborated with an engineer, Ian Sommerville to invent the device, Dreamachine, an art object to be viewed with the eyes closed. At age 18, he joined the Surrealist Group in Paris but was expelled later by Andre Breton on the basis of insubordination. He was devoted to painting and drawing and excelled in it with the use of Japanese and Arabic scripts he created calligraphic works

Brion Gysin was born on January 19, 1916, in the Canadian military hospital in Taplow, Buckinghamshire, England. Brion Gysin was born to a Canadian mother, Stella Margaret Martin and Leonard Gysin, a captain with the Canadian Expeditionary Force. Leonard was killed eight months after the birth of Brion Gysin in action. After his death, Stella returned to Canada, where he settled in Edmonton, Alberta. Brion Gysin was then educated at an Anglican boarding school, being the only Catholic in the school. Brion Gysin graduated from the school at age 15 and continued at the Downside School in Stratton-on-the-Fosse in England.

Brion Gysin later left for Paris to study La Civilisation Françoise in 1934. This was a course an open course offered at the Sorbonne and while there gained interest and with the help of Mari Bertha Aurenche, gained literary and artistic contacts. He also joined the Surrealist Group and through that started to patronize the works of Valentine Hugo, Leonor Fini, Salvador Dali, Dora Maar and Picasso. In 1935, Brion Gysin made a debut exhibition alongside Ernst, Victor Brauner, Giorgio de Chirico, Picasso, Marcel and Duchamp among several others at the Galerie Quatre Chemins in Paris. Gysin works were, however, pulled off on the day of the preview as he was expelled from the Surrealist Group by Andre Breton. Reasons for the expulsion were linked to his insubordination towards Breton.

Brion Gysin served in the US Army during the Second World War, and after he was discharged, he returned to his literary job. In 1946, he published, To Master, a Long Goodnight: The History of Slavery in Canada, which was a biography of Josiah Henson best known as Uncle Tom. The same year he took a year and a half course to learn the Japanese language as well as calligraphy and that had a great influence in his artwork. He became one of the first Fulbright Fellows in 1949.

During this time, Brion Gysin sought to go into the history of slavery at the University of Bordeaux and also in Archivo de India in Seville, Spain but later abandoned the idea. Brion Gysin later left for Morocco after he had previously visited the country with novelist and composer Paul Bowles in 1950. While in Morocco he opened the restaurant called The 1001 Nights in partnership with his friend and cook, Mohamed Hamri in 1954. He was, however, not very successful in the business and it was permanently closed in 1958

Brion Gysin, therefore, returned to Paris to lodge at the flophouse located at nine rue Gît-le-Coeur, which later became the Beat Hotel where he commenced his drawings. Brion Gysin later discovered the Dada technique, while working on one of his drawings and what came to be the cut-up technique, which his friend and poet, William Burroughs used in his writings. Burroughs first used it in his work Naked Lunch, and this would change the later landscape of American literature.

Brion Gysin also helps Burroughs in the editing of his works likeInterzone. In 1961, he partnered with an engineer, Sommerville to build the dream machine. It became the first art object, which could be seen with the eyes closed. The device was able to produce a change of consciousness in receptive viewers by using alpha waves in the eight to16 Hz. Brion Gysin also worked with jazz soprano saxophonist, Steve Lacy and recorded an album with French musician Ramuntcho Matta in 1986, on which he rapped and sang his own texts. Other performers on the album included  Don Cherry, Elli Medeiros, Lizzy Mercier Descloux among several others.

Brion Gysin died on July 13, 1986, of lung cancer. He was cremated and his ashes scattered at the Caved of Hercules in Morocco. He was honored with an American Commander of the French Ordres des Arts et des Lettres in 1985.