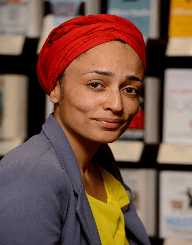 Zadie Smith was born on October 25th, in 1975. She is a celebrated contemporary novelist. She released her first novel in 2000 titled White Teeth. To her surprise, Smith career blossomed immediately as her first novel garnered her profound fame.

Sadie Smith alias Zadie Smith was born on October 25th, in 1975. Her place of birth was in Brent, England. She is the daughter of Yvonne Bailey and Harvey Smith. When Smith was 14 years old, she preferred to use the name Zadie rather than Sadie.

Growing Zadie Smith went to a number of schools including Malorees Junior School and later to Hampstead Comprehensive School. As for her college education, she enrolled at King’s College in Cambridge. Here, she majored in literature.

Zadie Smith released her first novel called White Teeth in 1997. Interestingly, the book was published before it was completed. Upon its publication in 2000, the novel immediately garnered Smith high acclaim as it became a best-seller. The novel was acknowledged worldwide and that it earned Smith several awards including Betty Trask Award and the James Tait Black Memorial Prize.

Zadie Smith wedded Nick Laird, a novelist in 2004. The two have got two children.