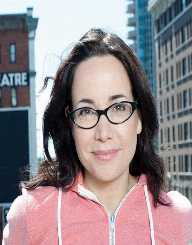 Janeane Garofalo is an American actress, stand-up comedian, and writer. Born on September 28, 1964, she started her professional career as a stand-up comedian before delving into acting. As a stand-up comedian, she was cast member on Saturday Night Life, The Ben Stiller Show, and The Larry Sanders Show. As an actress, Janeane Garofalo has appeared in several movies including The Truth About Cats and Dogs, The Matchmaker, Reality Bites, Sweethearts, Mystery Men and the Independent among others. She was the host of The Majority Report in America Radio alongside Sam Seder from March 2004 to July 2006. Garofalo is also a progressive activist.

Janeane Garofalo was born on September 28, 1964, in Newton, New Jersey to Joan and Carmine Garofalo. Her mother was a secretary and her father a former executive at Exxon. She is of Irish and Italian ancestry and raised as a conservative Catholic. Growing up she lived in Ontario, California; Madison, New Jersey; and Katy in Texas. Garofalo studied history at Providence College. It was during that time when she contests and won the title of “Funniest Person in Rhode Island” in a talent search show by Showtime cable Network. She graduated from Providence with degrees in History and American Studies.

After graduating from college, Janeane Garofalo aspired to become one of the writing staff of Late Night with David Letterman, hence became a stand-up comedian. However, she did not have it easy at the start as she struggled through and picked up odd jobs including working as a bike messenger in Boston.

In 1990, Janeane Garofalo launched her career as a stand-up comedian and made several appearances in clubs and on television shows. During that period, she was part of the alternative comedy scene in Los Angeles. She made appearances at Un-Cabaret and other big venues. Between 1995 and 2005 she co-created the Eating It comedy series, which ran weekly at the Luna Lounge. She served as a performer and host of the show. In June 2010, she did the one-hour stand-up special title, “If You Will” at the Moore Theatre, Seattle, aired on Epix. The show was later released on DVD in September 2010.

Janeane Garofalo made a film debut as a cashier in “Late for Dinner,” 1991. She then played other minor roles until she had a breakthrough role in the film Reality Bites, 1994 as Vickie Miner. She played roles in other works like “Bye Bye Love,” “Now and Then” and “I Shot a Man in Vegas.” In 1996, she gained a starring role in the romantic comedy “The Truth About Cats & Dogs.” She played the role of Abby alongside Uma Thurman. The film was highly acclaimed and had modest success commercially. She rode on the success of the film to earn the lead role in The Matchmaker, 1997 and followed it with a supporting role in “Cop Land” as deputy sheriff Cindy Betts.

He voiced the role of Ursula the Artist in the English dub of the animated fantasy film “Kiki’s Delivery Service.”Garofalo has also appeared in films including Mystery Men, Steal This Movie!, The Independent, Wet Hot American Summer, The Search for John Gissing, the Wild, Bad Parents.

Janeane Garofalo appeared on Half Hour Comedy Hour on MTV as a stand-up comedian. She was a cast member on the short-lived Fox’s television series Ben Stiller Show in 1992 alongside Andy Dick and Bob Odenkirk. This led to her role as Paula on The Larry Sanders Show on HBO. The role earned her two nominations for Primetime Emmy Award for Outstanding Supporting Actress in a Comedy Series in 1996 and 1997.

She joined the cast of Saturday Night Live 1994-95 season after the cancellation of The Ben Stiller Show. She appeared in the segment "the disquisition" of The Henry Rollins Show during the 2007 season of the show. Garofalo also appeared in the short-lived spinoff TV series Criminal Minds: Suspect behavior in 2011 and seven episodes of Girlfriends’ Guide to Divorce.

Janeane Garofalo alongside Sam Seder co-hosted the talk show The Majority Report on Air America Radio starting March 2004. Her early days with the Radio has been chronicled in the documentary, Left of the Dial.

In 1991, Janeane Garofalo married writer Robert Cohen in Las Vegas. Cohen was at the time the writer for The Ben Stiller Show. She did not know her marriage to Cohen was binding since they were both drunk during the ceremony that took place at a drive-through chapel in Las Vegas. According to her, she thought the marriage was just a joke since it was not filled at a local courthouse. Their union was officially dissolved in 2012. Garofalo and Ben Stiller co-wrote the New York Times bestseller Feel This Book: An Essential Guide to Self-Empowerment, Spiritual Supremacy, and Sexual Satisfaction in 1999.