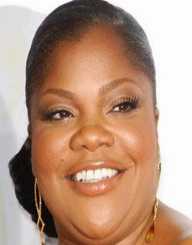 Comedian and actress Mo’Nqiue was born Monique Angela Imes on the 11 December 1967 in Baltimore, Maryland. Her parents were Steven Imes, a drug counsellor and Alice Imes, an engineer. She was the youngest of four children, having a sister Millicent and two brothers Gerald and Steven.

Mo’Nique was a pupil at Milford Mill High School, Baltimore (1985). She then enrolled at Morgan State University and graduated from the Broadcasting Institute of Maryland (1987).

Between 1999 and 2004, Mo’Nique acted as Nikki Parker in the television show The Parkers. At the same time, she was involved in standup comedy and appeared at various venues. She was the executive producer and host of Mo’Nique’s Fat Chance and also hosted a season of Flavor of Love Girls: Charm School.

Mo’Nique's stage debut was in The Vagina Monologues (March 2002) which featured an all African-American cast.  Film roles include  Beerfest, 3 Strikes, Two Can Play That Game, Half Past Dead and Soul Plane, Domino and Phat Girlz. In 2008, she appeared as Aunt Carla in Steppin: The Movie as well as Welcome Home.  Her role in Precious (2009) won her the Sundance Film Festival Special Jury Prize and numerous other major awards for her portrayal of the abusive mother of an inner-city teenager.

She appeared as Claire Rosseau in Blackbird (2014). In addition to acting and comedy, Mo’Nique has written two books: Skinny Women Are Evil  (2003), and Skinny Cooks Can’t Be Trusted (2006). She has appeared on radio including her show Mo’Nique in the Afternoon (2008-2009).

Mo’Nique’s breakthrough role was her portrayal of an abusive inner-city mother in Precious (2009). She won an Oscar for Best Supporting Actress, the National Society of Film Critics Award, the Golden Globe, Los Angeles Film Critics Association Award, New York Film Critics Circle Award, the BAFTA Film Award, and the Special Jury Prize at the Sundance Film Festival plus many other major awards.

Mo’Nique has accused Ophrah Winfrey, Lee Daniels and Tyler Perry of blackballing her from the film industry with accusations that she was demanding. It was also reported that she refused to promote the film Precious internationally. In 2018, Mo’Nique called for a boycott of Netflix because of pay inequality.