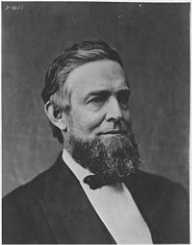 US 17th vice-president Schuyler Colfax was born on the 23 March 1823 in New York City, New York. His grandfather had served under George Washington and had fought in the American Revolution. His father was named after General Philip Schuyler. Schuyler Colfax Snr was a bank teller who worked on Wall Street in New York City. He married Hannah Stryker in 1820 and died of tuberculosis in 1822 four months before the birth of his only child, Schuyler Colfax Jr.

Schuyler Colfax attended school until the age of ten when he left school to help with family finances. He initially worked as a clerk in a retail store. When he was thirteen, his mother remarried, and the family moved to New Carlisle, Indiana. Schuyler Colfax then worked for his stepfather, George Matthews, in his store and post office. During this time Colfax became interested in reading and became an autodidact.

In 1841 the family moved to South Bend, and Matthews was elected as a Whig candidate for county auditor. He hired Colfax as his deputy, and during this time Colfax was able to learn parliamentary procedure as well as the art of debating.

When Schuyler Colfax was sixteen years old, he approached the editor of the Whig newspaper, the New York Tribune and asked to be able to submit articles. The editor agreed, and Colfax’s views on Indiana politics were published. At the same time, he was reporting on Indiana political affairs in the Indiana State Journal. He was also approached to edit the South Bend Free Press. In 1845 he purchased the South Bend Free Press, renaming it the St Joseph Valley Register.

Schuyler Colfax was initially a member of the Whig Party and eventually joined the Republicans. He was elected to Congress on a Republican ticket. He remained in politics until 1869. Between 1869 and 1873 he served under President Ulysses S. Grant as vice-president of the United States.

Schuyler Colfax was a delegate at the Whig convention in 1848. During the drawing up of Indiana’s constitution in 1849, he was opposed to a law banning African Americans from settling in Indiana or banning those living in the stage from purchasing land.

He was chosen to run for Congress for the Whigs in 1851 but lost to the incumbent who was a Democrat. He again ran for Congress 1854 as an Anti-Nebraskan. Then he ran as a Republican and won election to the 34th-Congress as well as to the following six Congresses. In 1868 he became the Republican nominee for Vice-President and was Speaker of the House of Representatives in the 38th, 39th and 40th Congresses.

Schuyler Colfax died on the 13 January 1885 in Mankato, Minnesota.