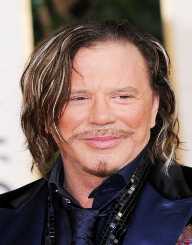 Mickey Rourke is an American actor, former boxer, and screenwriter born on September 16th, 1952. He starred in  9 1/2 Weeks along with Kim Basinger. Mickey has also been a professional boxer after he took a break from acting. In fact, he was only 12 when he championed in a boxing match. His boxing name at the time was Phil Rourke. Later he made a comeback to the film industry with his role in The Wrestler. The diversified actor also appeared in the hit films The Expendables and Iron Man 2. In the film Barfly, he was cast as writer Charles Bukowski.

Mickey Rourke was born on September 16th, 1952. His place of birth was in Schenectady, New York in the United States. He is the son of an amateur bodybuilder Philip Rourke, Sr. and his wife, Annette. They raised him as a Roman Catholic, and he has always been devoted to his faith.

At the age of six, his father abandoned them, and eventually, his parents divorced. Subsequently, his mother remarried to a father of five sons, Eugene Addis. They then relocated to South Florida along with Mickey’s sister Patricia and kid brother Joey.

In the fall of 1970s, Mickey Rourke decided to pursue acting as his career. Therefore, he went to New York and took classes under Sandra Seacat, the actress. His role in the 1981 film Body Heat attracted critical attention. The following year, he also gained recognition with his role in the cult hit Diner.

In 1983, Mickey Rourke also starred as the elder brother of Matt Dillon in Rumble Fish. Actors Nicolas Cage and Dennis Hopper featured in the film as well. The following year, he was cast in The Pope of Greenwich Village. Later in 1986, he featured in 9 1/2 Weeks and Barfly in the following year.

In his later years, Mickey Rourke developed a hedonistic lifestyle and became quite difficult to deal with. This affected not only his career but also his personal life. During filming, he would give his crew a hard time, and at home, he was accused of domestic violence.  In fact, he has been arrested a few times for alleged assault.

Throughout his life, Mickey Rourke has been involved with many celebrities. Sasha Volkova and  Terry Farrell are among those he has dated. He has wedded two times. His first marriage was to Debra Feuer in 1981. They were both casts in Homeboy in 1988. Later in 1989, the couple went separate ways though they remained friends. On June 1992, Mickey Rourke tied the knot to his second wife Carre Otis but again divorced in 1998. He has been dating Anastassija Makarenko, a Russian model since 2009.