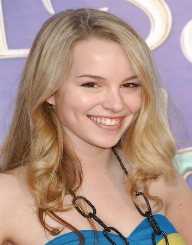 Bridgit Claire Mendler was an American actress, singer, and songwriter. Born on December 18, 1992, she began made an acting debut in 2004 in the Indian animation film The Legend of Budda. Bridgit Claire Mendler followed it with films like Alice Upside Down, The Clique and Labor Pains. Mendler signed a contract with Disney Channel in 2009 playing the role of Juliet van Heusen in Wizards of Waverly Place. The film became very popular gaining her another role as Teddy Duncan in the Disney series Good Luck Charlie, which ran from 2010 to 2014. She then starred in the film adaption of the series, Good Luck Charlie, It’s Christmas, in 2011.

That same year she starred in the Disney Channel Original Movie Lemonade Mouth playing the role of Oliver White and performed several songs in it. Mendler released her debut album Hello My Name Is,..., in 2012. The album was successful selling over 200,000 copies and making it to number 30 on the US Billboard 200. Her single “Ready or Not” became a hit making it to the international Top 40 hit. It also reached the status of gold in Norway, and platinum in the United States, Canada, and New Zealand.

Bridgit Mendler has also undertaken several philanthropic activities to give back to the society. She was an ambassador for First Book in 2010, aimed at encouraging reading and giving books to needy children. She was also an ambassador of GiveWith Target for the Target Corporation in raising funds to reform schools in the United States.

Bridgit Claire Mendler was born on December 18, 1992, in Washington D.C and has a younger brother Nick. At age eight, the family moved to Mill Valley, California and this was where his interest in acting grew. She started with playing roles in local drama and musical theatre. Bridgit Claire Mendler became the youngest performer in the San Francisco Fringe Festival.As she developed a great interest in acting, she hired an agent to assist her in getting acting roles at age eleven. In 2012, Bridgit Claire Mendler enrolled at the University of Southern California to study anthropology. She also studied Medieval Visual Culture. She graduated in 2016.

Bridgit Claire Mendler made an acting debut in 2004 playing the role of Lucy in the animated Indian film The Legend of Buddha. She later had a guest star role on the soap opera General Hospital in 2005. Her film debut was in Alice Upside Down a film adaptation of Alice series, in 2007, starring alongside Lucas Grabeel and Alyson Stoner. He also starred in films like The Clique, Labor Pains. Bridgit Mendler was cast for in the Disney Channel series Wizard of Waverly Place from 2009 to 2012 playing the role of Juliet Van Heusen.

Bridgit Claire Mendler followed her outstanding performance with a role in the Disney Channel Original Series, Good Luck Charlie. Mendler also starred in the Disney Channel Original Movie Lemonade Mouth, in 2011. The film was received well with a viewership of 5.7 million on the night it was premiered. In the film, she did several songs for the soundtrack, later released on April 12, 2011, by Walt Disney Record. The single “Somebody” peaked at number 89 on the Billboard Hot 100. That same year, she had a supporting role in “Beverly Hills Chihuahua 2”, for which she recorded the song, “This Is My Paradise.” It was later released as a promotional single on January 11, 2011. She was starred in Disney’s Good Luck Charlie, It’s Christmas!, 2011, and guest starred in the television series, House, playing as Callie Rogers.

Bridgit Mendler was a cast in the Fox comedy television pilot, Thin Ice in 2017. It was announced in May 2017 that she had been cast for the Netflix comedy film, Who Do You Think Would Win? alongside Jackie Sandler, Joey Bragg, David Spade and Matt Shively.

Bridgit Claire Mendler signed with Hollywood Records on March 31, 2011, and started working on her debut album. Her debut album Hello My Name Is…. Was released in 2012. The single on the album, Ready or Not, became very successful peaking at number 49 in the United States. It also performed creditably in Australia reaching 53, number 7 in the United Kingdom, among the top 20 Chart in Belgium, New Zealand and the Republic of Ireland. It was certified platinum in the United States and Canada and Gold in Norway, New Zealand, and Denmark. The album itself Hello My Name Is…. sold over 200,000 copies and peaked at number 30 on the Billboard 200. Mendler severed ties with Hollywood Records in 2015.

Bridgit Claire Mendler came out with her second studio album Nemesis. A single on the album, Atlantis, featuring Kaiydo, was released on August 4, 2016. The EP of Nemesis was released on November 18, 2016. She released the single "Temperamental Love" featuring Devontée on February 3, 2017.