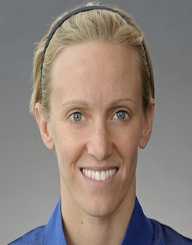 Dana Vollmer is a four- times Olympics gold medal winner and a former world record holder in swimming. She set a World Record in 100 meters butterfly in 2012 Summer Olympics.

Dana Vollmer was born in Granbury, on November 13, 1987. She began competitive swimming at the age of 12. She was the youngest in the Olympics Trials. Her mother was a famous swimmer who held various swimming records. Coming from a family of a former swimmer helped Vollmer.

Her mother started training her at a very young age. At the age of 14, she was diagnosed with heart disease. Despite the challenge she never stopped swimming. A procedure to correct her heart condition was conducted in 2003. After a successful surgery, her doctors advised for a defibrillator near the completion pool as a precaution for a heart emergency.

It was during her time in the University of Florida when Dana Vollmer swam for Gregg Troy's Gators swimming and diving squad in a competition in 2006. Her splendid performance earned her All-American honors four times.

Among her peers in college Vollmer was the most valuable swimmer in college for three years.

Dana Vollmer with her teammates, Natalie, Coughlin, Carly Piper, Kaitlin, and Sandino won gold for the U.S team in Greece during 2004 summer Olympics. She followed her excellent performance in Greece with two medals in Rome Italy in 2009.

Another exceptional performance by Vollmer came in Shanghai in 2011 World Aquatics Championship. She took home a total of three medals, two gold medals, and one silver.

During Landon 2012 Olympic Games, Dana Vollmer produced her best performance ever. She not only won a gold medal but broke the Olympic record. Her second gold came when her team won the 4 by 4 relays.

During Rio Olympics, Dana Vollmer took home a bronze medal in 100 meters butterfly category. During that time her team also won a silver medal in the relay.

Dana Vollmer suffered from shoulder and back injuries, which prevented her from qualifying for the Beijing Olympics in 2008. It was during that time that she received another setback as she was diagnosed with a stomach problem siting mental pressure and stress as the cause of the disease.

Vollmer is married to Andy Grant, who was also a swimmer.