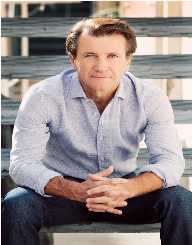 "How to succeed in life and business" is a gripping book that Robert Herjavec wrote and published on 21st, September 2010. He followed it up with another piece titled Leading, Competing and Succeeding. From rags to riches to the point of having a $20 note in his pocket, Robert is now an affluent man.

If you haven’t yet gotten a glimpse of him, then “Shark Tank” and “Dragons’ Den” TV series should ring a bell. He is currently known for his developing entrepreneurial skills. Not to mention his high-paying profession acts as a reality to others. Hailing as the only son of a Croatian non-native, he gained his wealth through determination and hard work. The world knows him as the owner of The Herjavec Group, a Canadian businessman, and a television star. Read further to gain more insight into his early and later achievements.

There is no doubt that Robert has already made a name for himself in the business world. Talking about inspiration and wisdom, he's a one of a kind. Allow me to define him as a strong-willed person who prefers platinum (wealth and power) instead of an impoverished life. This is seen when he tried to do all odds of jobs for his family’s upkeep. In short, his life is always linked with prestige and cultivation. By this, I mean that Herjavec prefers to develop new skills that tend to compete with his creative mind. Read on.

On 14th, September 1962 Robert Herjavec was first seen in the world in Varazdin, Croatia. At eight years of age, his family traveled to Canada where they stayed temporarily. After several months, the family settled in Toronto. Robert joined the University of Toronto where he received his first degree in English Literature. While still in his teenage years, Robert was forced to search for odd jobs for his family’s upkeep.

Herjavec’s first paying job was that of an assistant director in countable of productions. He stayed in the position for some time where he heard about a technology company called Logiquest. The organization majored in the distribution of IBM’s software systems. Though he worked hard to earn a good reputation, he stayed for six months without pay. He volunteered vehemently without asking anything in return. Eventually, he got a seat as the General Manager of the said company.

Early in 1990, at 28 years of age, Robert had already gained profound knowledge. As a result, he opted to start his technology company where he established a name called BRAK Systems. In the twinkling of an eye, the company turned into the most proficient providers of Computers Softwares. It was in the new millennium that Robert opted to sell his company to AT&T.

In 2000 Robert took a short retirement where he opted to focus on his family upbringing. After three years, he reinstated back with another company titled The Herjavec Group. To date, Robert still serves as the acting CEO of the enterprise. It is currently recognized as the most developing and ever-growing technology company in Canada.
In addition to his entrepreneurial skill, Herjavec plays a significant role when it comes to television persona. He is known for his great spark in two productions of Shark Tank and Dragon’s Den. Besides, he has authored countable of books including Driven: How to Succeed in Business and in Life as well as The Will to Win.

Robert’s efforts and zeal were recognized by several institutions where he received countable awards. Some of the notable ones include Rookie of the Year in 2011 and Entrepreneur of the Year Award. His company was named as the fastest-growing company in Canada.

Robert Herjavec first tied a nuptial knot with an Optometrist called Diane Plese in 1990.The marriage was blessed with two daughters: Caprice and Skye Herjavec and a son named Brendan Herjavec. However, the two called it quit in 2016 where Robert wedded a ballroom dancer, Kym Johnson Herjavec. When it comes to hobby and leisure time, Robert loves everything to do with cars. He is a public winner of the 2010s and 2011s Miami Marathon Ferrari Challenge.