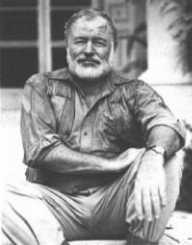 Ernest Hemingway was born on July 21st, 1899. His place of birth was in Cicero- (now present in Oak Park), Illinois. He is a celebrated novelist of the 20th century. In addition to his successful career, he is a Nobel Prize winner. His pinnacle of success came at a time when he released his book The Old Man and the Sea. Hemingway’s published books later became a significant influence on writers that came after him. He died in 1961 after committing suicide.

Born on July 21st, 1899, Ernest Hemingway was an American born novelist that rose to become one of the world’s preeminent writers of all time. He was born in Chicago suburbs to Clarence Edmonds Hemingway and Grace Hall Hemingway. His father worked as a physician while his mother was a musician. Both parents were highly respected in the Oak Park community.

During Hemingway’s high school period, his passion and skill for writing made him a sports writer for the school’s magazine called Trapeze and Tabula. Later on, he graduated and worked for Kansas City Star as a journalist. Here, he gained a writing experience that would play an essential role in his future writing style.

In 1918, there was a Red Cross recruitment going on, and Ernest Hemingway took the job as an ambulance driver. He worked as a driver for two months before getting injured while on duty. He was only 18 years of age while serving his country during the World War I. While recovering from the injuries that he faced; he fell in love with one of the nurses, Agnes von Kurowsky. The following year, the two had agreed to get married together before Agnes got engaged to another man.

When Ernest Hemingway was 20 years old, he returned to the U.S. where he later got employed in Toronto Star. Soon, he met Hadley Richardson; she was the woman that Hemingway thought of as his first wife. They got married and moved to Paris.

Back in the day, Paris was a location where the most exciting individuals lived. This accompanied by the low monetary exchange rate could be the reasons why Ernest Hemingway and his first wife resorted to living here. It is in Paris that Hemingway came in contact with renowned writers such as Ezra Pound, James Joyce, and Gertrude Stein. These were the individuals who were going to be influential in the career-life of Hemingway.

A few years after settling in Paris, Hemingway and Hadley got their first born son and named him John Hadley Nicanor Hemingway. This was in the year 1923. Two years later, Hemingway and his wife made a trip to a festival which would then become the basis for his debut novel, The Sun Also Rises.

Shortly after his first novel was published, the rumor was that Hemingway was having an affair with Pauline Pfeiffer. This led to the famous writer separating with his first wife. He later got married to Pauline Pfeiffer. During this period, he was working on releasing another book Men Without Women featuring short stories.

Soon after, Hemingway’s second wife got pregnant, and the two shifted back to America. In 1928, the couple was blessed with their first son, Patrick Hemingway after which they settled in Key West, Florida. Hemingway was not only celebrating the birth of his son, but he was also celebrating the completion of his famous book A Farewell to Armswich revolving around World War I.

During the 1930s, Ernest Hemingway spent most of his time touring and adventuring the world. He went to African and Spain to catch a glimpse of big-game hunting and bullfighting respectively. In 1937, he met Martha Gellhorn who would later become his third wife. It was during this period that he acquired his writing material for the upcoming novel Whom the Bell Tolls. The novel was a success and it was part of the Pulitzer Prize nominees.

Shortly after meeting Gellhorn, Hemingway divorced his second wife. He would spend time with her during the beginning to the end of World War II. He was the correspondent during the World War II whereby he also met his future wife, Mary Welsh, who was also a correspondent.
The Old Man and the Sea came in 1951, and this marked Hemingway’s pinnacle of success as a writer. It was his most acclaimed books he had written so far. The book’s success earned him Pulitzer Prizes that he was initially nominated for in his former book.

The last marriage that Ernest Hemingway had with Mary Welsh was the last one he had until his death in 1961. During his final years, he was depressed and that his health deteriorated. Some health conditions that he had initially been treated for were liver disease and high blood pressure. His mental health was also not up to par during the late stages of his life. On July 2nd, 1961, he committed suicide by shooting himself. He died at the age of 61.