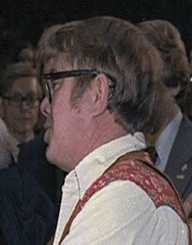 American peanut farmer and businessman Billy Carter was born to Lillian Gordy and James Earl Carter Sr. in Plains, Georgia on the 29 March 1937. His brother was President Jimmy Carter, and he also had two sisters, Ruth Carter Stapleton, and Gloria Carter Spann.

Billy Carter enrolled at Emory University, Atlanta but left without obtaining a degree.

After serving in the US. Marine Corps four years, Billy Carter went home to Plains, Georgia where he began working in the family business growing peanuts. During the 1970s, Carter owned and operated a service station in Plains George and was also the official spokesperson for Peanut Lolita, a liqueur. He also endorsed Billy Beer, a product of the Falls City Brewing Company. When his brother Jimmy successfully ran for President of the United States, Carter took charge of the farm and family peanut warehouse in Plains, Georgia.

During the late 1970s, Billy Carter was registered as a foreign agent of the Libyan government and received a loan of $220,000. Concern about the Libyan involvement led to a Senate hearing which became known as Billygate. President Jimmy Carter was obliged to issue a statement (1980) acknowledging that he was aware of all the facts and that his brother had had no influence on U.S. policy or actions regarding Libya and that he would have none in the future.

The Senate committee found no evidence that Carter had influenced American policy in any way. But the report, which was published shortly before the 1980 Presidential election did claim that President Carter had been negligent in not disassociating himself from his brother’s different activities.

Billy Carter's wife was Sybil Spires whom he married in 1955. They had six children. Carter died in 1987 from pancreatic cancer. He was 51 years old. His son, William Carter IV, published Billy Carter: A Journey Through the Shadows in 1999. When Jimmy Carter was once asked if his brother embarrassed him, he replied that he loved him.