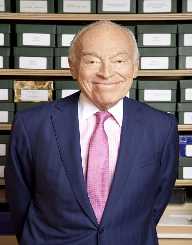 In 1964, Ronald Lauder began work for his parents in their Estee Lauder Company.

Ronald Lauder also became involved in politics, and in 1984 he was appointed as Deputy Assistant Secretary of Defense for European and NATO Policy, based at The Pentagon. The United States President at the time, Ronald Reagan, named Ronald Lauder as United States Ambassador to Austria, in 1986. He held the position for one year.

Ronald Lauder ran for Mayor of New York City in 1989 but lost to Rudy Giuliani.

The Ronald Lauder family was Jewish, and the boys were raised as such. Ronald Lauder had strong ties to Israel, and in 1998 he was asked by Benjamin Netanyahu (Israeli Prime Minister), to begin the informal discussion with Syria. The negotiations continued after the elections in Israel, in which Ehud Barak took over as Prime Minister.

Although Ronald Lauder made good headway with Syria on a treaty for peace, the negotiations eventually broke down. As many would be aware, during the Nazi period, many European Jewish people had their wealth stolen and confiscated by the Nazis. Many artworks were included in the “lost” fortunes. Ronald Lauder has assisted in the recovery of several of these artworks.

Ronald Lauder is Chairman Emeritus of the Estee Lauder Companies. His brother, Leonard, is currently Chairman of the Board.

Ronald Lauder became President of the World Jewish Congress in 2007, a position he still holds. He has been vocal and outspoken in the defense of Israel on the global platform, when governments or organizations behave with an anti-Semitic attitude, or to the detriment of Israel.

From a political viewpoint, Ronald Lauder was responsible for the movement that introduced term limits for council positions in the New York City Council, including that of Mayor. The changes came into effect by referendum in 1993. He is also an honorary trustee for the World Monuments Fund. This non-profit organization protects heritage sites of cultural heritage, all over the world. The organization itself is based in New York City.

Ronald Lauder established the Ronald S. Lauder Foundation in 1987. The Foundation is to help those Jewish communities in Europe that were decimated during the Nazi reign. The Foundation assists to rebuild their Jewish lives, and to prepare their young citizens for success, both professionally, and personally.

Ronald Lauder also founded the Lauder Business School in Austria. He founded the school in 2003 and was also president.