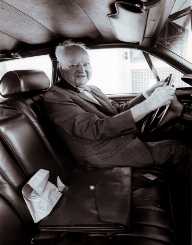 H. L. Hunt was an entrepreneur and Texas oil tycoon born on February 17th, 1889. He was also actively involved in political activism as a conservative Republican. The series Dallas was created based on his perceptions. He was therefore among the greatest inspirations of the television series. H. L. Hunt was respected not only for his wealth but also for his intelligence. He was a man of great wisdom. In 1934, he established the Hunt Oil Company. He fathered May children with his three wives during his married life. The wealthy man was however involved in a controversy where he was linked with John F Kennedy’s assassination.  He died the wealthiest man ever worldwide after attaining the highest net worth in history.

H. L. Hunt was born on February 17th, 1889.  His place of birth was in Illinois.  He was the last born child of Haroldson Hunt and Ella Rose Hunt. His father was a wealthy farm entrepreneur. He had seven siblings. He was homeschooled for his primary education.

In his teenage days, H. L. Hunt frequently relocated before he finally settled in Arkansas. In 1912 he earned a living at a cotton plantation. During this time, he was also known to be a great gambler. He even risked the only 100 dollars which was all he had in gambling at New Orleans. Luckily, H. L. Hunt won with over 100,000 dollars. With this fortune, he bought oil properties in places near El Dorado in Arkansas. He never continued purchasing more of these oil properties after that through the 1920s.

He later met C.M. Joiner the owner of 4000 acres of land with oil situated in Rusk County Texas. He had no capital for drilling the oil, so he sold it to Hunt. This was a fortune of a lifetime Hunt who immediately began drilling the oil. Later he established his pipeline and became a great oil distributor for companies like Sinclair Oil Company.

In 1936 H. L. Hunt established the Hunt Oil Company. Its headquarters was initially based in Tyler, Texas before it was shifted to Dallas. Hunt’s oil company then became the largest private producer of oil in the U.S. During the Second World War, Hunt’s oil company was the major oil distributor. Later in 1946, he supplied the U.S with  85% of natural gas. It was during a time of critical fuel shortage.

In 1951, H. L. Hunt established his firm Facts Forum.  In 1952, he was among the leaders of the MacArthur President movement. In 1960, he also supported the presidential candidate Lyndon B. Johnson. Unfortunately, he did not win the elections.

H. L. Hunt was a successful businessman but was also believed to have been involved in many controversies. He has linked John F Kennedy’s assassination following various reasons.

H. L. Hunt was a father of 15 children by his three wives. He married Lyda Bunker in 1914 and had seven children. He later married his second wife Frania Tye and had four children with her. His third wife was Ruth Ray whom he married in 1957. Together they had four children.