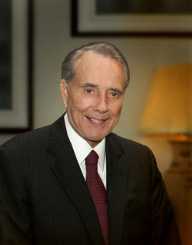 Bob Dole was born on July 22, 1923. He is an American politician and attorney. He represented Kansas in the House of Representatives from 1961 to 1969. He also represented Kansas in the United States Senate from 1969 to 1996. He is also a World War II veteran. He is said to be the longest running Republican Senator in the history of the United States. In 1996, he dropped from active politics when he lost the presidential bid that year. He donated and raised funds to erect the National World War II Memorial. He has also written some books. He is working as a special counsel to Alston and Bird, a prestigious law firm in the United States.

Bob Dole was born Robert Joseph Dole on July 22, 1923, in Russell, Kansas. He was born to Doran Ray Dole who sold dairy products and Bina Dole who was a travelling salesperson. He was brought up alongside three siblings, Kelly, Norma and Gloria. During the Great Depression, his family was significantly affected that they had to live in their basement to rent out the other rooms to raise money. He worked as a paperboy and a soda jerk in a local drugstore to make ends meet for his family.

Bob Dole attended Russell High School where he was a very hardworking student. He was also good at sports and won a lot of matches for his school team. Bob was also a member of the Boys Scout. In 1941, he graduated from Russell High School. He enrolled at Kansas University for a premedical course. He left college when the United States joined World War II.

In 1942, he enlisted in the army and became the second lieutenant in the 10th Mountain Division of the United States Army with time. In 1944, he was sent to Italy, and in 1945, he was injured while trying to save an army radioman. He was injured in a German machine gun attack. The injury was so bad that he was paralyzed from his neck downwards. He was flown back to the United States where he underwent treatment for so many years. As years went by he started recovering and through encouragement, by friends and family, he got enrolled at the University of Arizona. He got enrolled to study Art. A year later he went back to Kansas to study law at Washburn Municipal College in Topeka. In 1952, he received his LL.B Degree.

In 1950, Bob Dole was elected to the Kansas House of Representatives on a Republican ticket. This was followed by his admission to the Bar in 1952, and with time he became the County Attorney of Russell County. In 1961, he entered into national politics as a member of the United States House of Representatives. In 1968, he was elected as the Senator from Kansas. He was re-elected to the position in 1974, 1980, 1986 and 1992. In 1996, he resigned from his seat as a senator to take part in the presidential elections.

In 2003, Bob Dole founded Robert J. Dole Institute of Politics in Kansas which is an institute aimed at bringing bipartisanship back to politics. Bob and George McGovern created the ‘George McGovern-Robert Dole International Food for Education and Child Nutrition Program’ to provide meals to more than 22 million children across 41 countries. The Program is funded mostly by the United States Congress. He donated and raised money for the erection of the National World War II Memorial.

In 1997, Bob Dole received the Presidential Medal of Freedom presented to him by President Bill Clinton for his service in the military. In 1997, he received the United States Senator John Heinz Award for Greatest Public Service by an Elected or Appointed Official. In 2004, he received the American Patriot Award for his service in the military and his commitment to his country. In 2015, he received Survivor’s Gratitude Award from the National Commemoration of the Armenian Genocide Centennial for his determination in raising attention to the Armenian Genocide.

In 1948, Bob Dole married Phyllis Holden, an occupational therapist. The couple had a daughter called Robin. In 1972, he divorced Phyllis. In 1975, he married Elizabeth Alexander Hansford, a United States Senator from South Carolina.