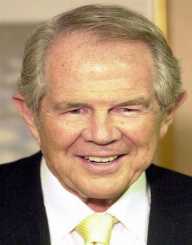 Pat Robertson is one of the American Media Mogul as well as the famous host of the Christain News Program and the 700 club. He is known to have founded several organizations and is a member of the Southern Baptist with conservative Christian ideals. He is born into a family of politicians and always tries his best to aim high and very big in politics. In addition to his father’s powers in the US Senate, he served on President Ronal Reagan’s Task Force on Victims of Crime. He later ran for the presidency which he lost blatantly in 1988.

He, being a very religious fellow, he returned to Christian broadcasting. He had the interest of becoming a powerful lawyer, but he gave way to religions and Christianity. Pat Robertson later studied theology and got ordained Southern Baptist Minister. He later went on to found the Christian Broadcasting Network among other several organizations. He is a very wealthy businessman with fame of making predictions of which many do not come true.

Pat Robertson was born on March 22, 1930, to Willis Roberston and Gladys Churchill. His father was at then a conservative Democratic Senator of the United States. He was named Marion Gordon at birth, but his elder brother nicknamed him Pat. He later enrolled at the Preparatory McDonogh School while he was 11. He graduated from the McCallie School in 1946 before he earned his B.A. in History from the Washington and Lee University.

Pat Robertson got drafted into the Army was later promoted in 1952 to the post of the first lieutenant. He later went ahead to study degree and enrolled himself at Yale Law School where he earned his law degree in 1955. He later underwent a religious conversion having realized that his calling was not really to become a lawyer. He went ahead to receive his Theological Seminary as well as Master of divinity degree in 1959. He established the Christain Broadcasting Network in 1960 before he got access to a cable TV Channel after operating on a small UHF for some years. He called the station CBN.

Later on, in 1966, he premiered his program, The 700 club in CBN and aired it on each weekday becoming one of the longest-running programs in the history of broadcasting. Later on, he established the CBN University and served as the chancellor. He later went ahead to name the University Regent University in 1989. American Center for Law and Justice which was founded by him was associated with the University. He later founded the Operation Blessing Relief Development Corporation. He was able to provide reliefs for so many people and international nations.

By 1990, CBN which was meant to be a non-profit organization is now becoming profitable gradually due to its popularity. Pat Robertson thus founded ABC Family Worldwide In. to distribute family entertainment and information programming. However, it was later acquired by Walt Disney Company. He, however, sold his very successful family Channel in 1997 to the News Corporation which changed its name to Fox Family.

He became very successful with media holdings all over the world including Africa and Asia. He also signed a deal with General nutrition to promote his products on The 700 Club. He often claimed that God spoke to him about future happenings, but most of the time, his predictions fail. He was also known for always making controversial comments on very sensitive issues. He earned the wrath of the people in a particular year because of this. By the time he reached his peak, he has had channels in over 180 countries. The Channel was very popular and notable among different Christians of the world. The cable was later renamed to CBN Family Channel.

His major work is known to be the founding of the CBN, Christian Broadcasting Network. This television network is a Christian oriented religious network.

Pat Robertson married Adelia Elmer in 1954 and had four children with her. He has a lot of several grandchildren, and one of his grandchildren was a broadcaster as well. He was presented with a Nobel Prize for making several predictions about doomsday, terror attacks and economic meltdowns which did not come true.