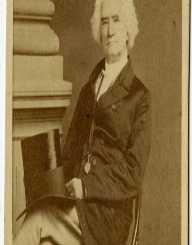 George Mifflin Dallas represented his country making efforts to strengthen the Union cause in Great Britain. The cities of Dallas in Texas and Oregon are named after him.

George Mifflin Dallas was born on 10 Jul 1792 in Philadelphia, Pennsylvania. His parents were Alexander James Dallas and Arabella Smith Dallas. George was given his middle name after Thomas Mifflin a politician friend of his father. His father served as the Secretary of the Treasury under the US President James Madison. George was educated privately and later studied at New Jersey College (now Princeton University).

George Mifflin Dallas graduated with highest marks in 1810. He studied law and was admitted to the Pennsylvania Bar in 1813.

In 1813 Dallas accompanied Albert Gallatin, Secretary of Treasurer as a private secretary on a diplomatic mission to Russia. He returned in 1814 and set up his legal practice in New York and later served as counsel to the Second Bank of US. He was appointed as Deputy Attorney General to Philadelphia in 1817. George Mifflin Dallas served till 1820. He was elected as Mayor of Philadelphia in Oct 1828 where he served till Apr 1829. President Andrew Jackson appointed him as the US Attorney for the eastern district of Pennsylvania where he served till 1831.

Dallas was a Democratic member of the US Senate for the state of Pennsylvania from 1831 to 1833. He served as chairman of the Committee of Naval Affairs and declined his nomination for re-election. Dallas resumed his legal practice and was appointed as Attorney General of Pennsylvania from 1833 to 1835. He was also the Grand Master of Freemasons Pennsylvania in 1835. Dallas was appointed as Envoy Extraordinary and Minister Plenipotentiary to Russia in 1837 by President Van Buren. He returned in 1839.

In 1839 Dallas was offered US Attorney Generalship after Buchannan refused. Dallas rejected the post. Dallas was a political rival of fellow Pennsylvanian James Buchanan who later became the 15th President of US. The rivalry was rooted in the power struggle of the Pennsylvania Democratic Party between the ‘Family Party’ and ‘Amalgamators.’ Dallas led the family party, and they believed in the supremacy of the constitution and on an active National government that would facilitate national commerce through protective tariff, a strong central banking system and promotes internal improvement.  Buchanan led the Amalgamators whose strength lay in the farmers of west Pennsylvania.

In May 1844 James Polk who was nominated President offered the Vice President post to Dallas after Silas Wright rejected the same. Dallas was elected and took an oath of office in Mar 1895. He served as Vice President from 1845 to 1849.Dallas was influential as the Presiding Officer of the Senate. He worked to support Polk’s agenda and cast many tie-breaking votes. Dallas also called for the annexation of all the Oregon territories and all of Mexico during the Mexican American war. He was satisfied with US annexation of part of these areas.

George Mifflin Dallas sought to maneuver himself as a contender for President for the 1848 elections. However, his reluctant vote to lower a tariff destroyed his base in Pennsylvania. His advocacy of Popular Sovereignty on slavery strengthened opposition against him. He lost hope of party support when President Polk appointed Buchannan Secretary of State. In 1856 he was appointed by President Franklin Pierce as Envoy Extraordinary and Minister Plenipotentiary to Britain where he served till 1861.

George Mifflin Dallas retired from politics and returned to his private life in Philadelphia. He died of a heart attack on 31 Dec 1864 at the age of 72. He was buried in St Peter’s Episcopal Churchyard, Philadelphia, Pennsylvania US.

Many counties have been named after Dallas. The cities of Dallas in Oregon and Texas are named after him.