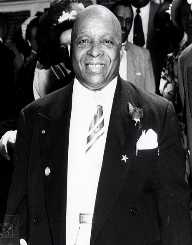 African American spiritual leader Father Major Jealous Divine was born in 1877. He took birth on a plantation in Hutchinson Island, on the Savannah River in Georgia, United States of America. His original name is George Baker. He came into prominence during The Great Depression of the 1930s. While the United States was reeling under the severity of the depression, Baker founded a cultish religious movement named the 'Peace Mission'. The members of this mission regarded him as an incarnation of God. He preached equal rights for all Americans, irrespective of their color and religious faith.

Baker also prospered as a cunning and experienced businessman amidst the devastations caused by the Great Depression. His farming and retail ventures thrived under his practical and shrewd business acumen in spite of the ongoing recession. The members of the conventional Black church considered him as a hoaxer and also a psychopath. However, his efforts in providing relief to his thousand of depression-stricken disciples were lauded by many contemporary cult leaders.

George Baker began his early career in 1899 as an assistant to Father Jehovia (Samuel Morris). Father Jehovia was the founder of a self-reliant religious group. During the late 1920s, Baker became the first follower of Samuel Morris. While Morris adopted the pseudonym of Father Jehovia and declared himself as the Eternal Father, Baker took the sobriquet of ‘The Messenger’. The duo was later joined by John A. Hickerson, the self-proclaimed Reverend Bishop Saint John the Vine. The trio influenced their disciples with their excellent oratorical skill and a new wave of thought. In 1912, their partnership collapsed, and Baker finally broke away from Morris. Adopting the pseudonym of Father Divine, Baker declared himself to be the God and opposed Father Jehovia’s assertion as the God. “I am the only God. I truly possess expression of God’s spirit. Everybody cannot be God” was his assertion.

After the three men consortium of God broke-up, Father Divine traveled south. In Georgia alone, he preached extensively. However, in 1913, confrontation with some local ministers led to his arrest, conviction and subsequent imprisonment for 60 days. Upon his release, he managed to gather a group of devotees of mostly Black women and impressed upon them the practice of sexual abstinence or celibacy. This enraged the husbands of his women disciples. On February 6, 1914, the husbands of his women devotees and local preachers got him arrested for lunacy. During his trial, Father Divine proved his mental stability and was released in spite of his maniacal beliefs.

In 1914, he traveled to Brooklyn, New York. Along with a small number of his followers, he formed a commune. The commune was housed in a middle-class apartment building in a predominantly Black locality. He prohibited the use of tobacco, alcohol, gambling, and sex in his community. He renamed himself as Reverend Major Jealous Divine by the year 1919. Upon his renaming, Father Divine again relocated to Sayville, New York (Long Island). There, he, along with his followers, became the first Black homeowners of the town.

Based on the complaints lodged by his neighbors, Sayville deputy arrested Father Divine on May 8, 1931. The charge for his arrest was disturbing the peace of the locality. Father Divine successfully furnished his bail bond of $1000 in cash, an astonishing feat on the backdrop of the devastating Great Depression. The trial was slow, and Father Divine was able to garner support for him during the process. During the final trial held on May 24, 1932, Justice Lewis J. Smith convicted him and issued one-year prison sentence to him with an additional fine of $500. In an astonishing event of coincidence, Judge Smith died two days after pronouncing the quantum of punishment. Father Divine and his followers lost no opportunity to describe the incident as ‘Divine intervention’.

Father Divine moved to Harlem in 1933. He flourished there as a prominent leader as well as a prosperous businessman. He opened residential hotels there and provided food, shelter, and job opportunities to his followers. In 1942, he moved to Philadelphia, Pennsylvania. Gradually, he withdrew himself from all his regular activities. Thereafter, he spent more than two decades of his remaining life in retirement. On September 10, 1965, Father Divine died of natural causes. During the last two decades of his almost retired life, he fought for civil rights relentlessly.