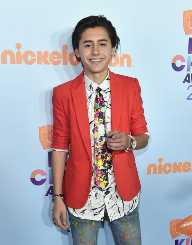 Isaak Presley has always had a love for music. He has been singing for as long as he can remember, and he started to learn how to play the guitar when he was only five years old. Isaak Presley unknowing began his music career when he started his first YouTube channel and posted videos of himself playing guitar and singing. One of his hit songs, Cowboys are Real Men, helped him to gain fame. One thing that sets Isaak apart from some of the other musicians his age is that he sings in both English and Spanish.

His singing and acting career even go hand in hand at times. In 2015, he guest-starred in the Disney hit TV show, Austin & Ally. He had a chance to play his music on the show, performing “Na Na Na (The Vacation Song).”

It was not hard for Isaak Presley to break into acting after his song on YouTube went viral. His father worked in the entertainment business, and he was able to jump start his son’s career. Isaak Presley began his professional acting career in 2011 when he was nine years old. His first project was Brooklyn Brothers Beat the Best. Since then he has mostly worked on the Disney Channel. He had had major roles in the show Stuck in the Middle. Some of the other shows he had appeared on are listed below.

Throughout his short acting career, Isaak Presley has already won one award. He won the Young Artist Award for Outstanding Ensemble Cast in a Web or VOD Series for his part in A History of Radness. He was also nominated for but did not win, the Best Performance in a TV Movie, Miniseries, Special or Pilot for a Young Actor for the same show.

Isaak Presley has also won awards for his musical career, including The Official Voice of Norco contest.

Although Isaak is a star, he knows better than to let fame go to his head. Isaak Presley uses what he has to help others, instead of becoming a spoiled Hollywood brat. He has played music for many charitable organizations, including the Heart of a Horse Foundation. He plans to keep playing music for good causes and visiting his fans in children’s hospitals. He hopes to one day set up his charity to help people who are less fortunate than he is.

Hobbies And Life Outside Of Fame

Singing and acting aren't all that defines this young star. Isaak Presley also loves to ride horses. His love of horses and the “simple life” helped to inspire some of his earliest music. He also loves to play sports. One of this favorite sports to practice is martial arts. He has entered in many competitions and won his fair share of them in his short time in this hobby. He is also working on earning his black belt!

Those who know Isaak Presley say that he is a wonderful teen with a heart of gold. There only seems to be signs that he will continue working with his great attitude, making friends, and singing songs that can make anyone want to sing along.