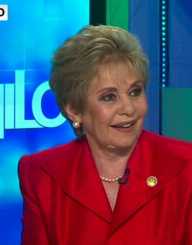 Mireya Moscoso is a Panama politician and the first woman president of the country. Born on July 1, 1946, he served a term in office from 1999 to 2004. She first contested for the high office during the 1994 general election, which she lost narrowly to Ernesto Perez Balladares of the Democratic Revolutionary Party. She returned again for the 1999 election which she won by a large margin or 8 percent against Martin Torrijos, to become the first woman president of Panama. Moscoso was the wife of the three-time president, Arnulfo Arias, who she married when in exile after a coup d’état. Arias died in 1988, after which Moscoso took over his political party, Arnulfista Party, and his coffee business.

Her administration suffered economic downtowns and lots of corruption scandals. Her tenure became even more difficult as the opposition had a majority in the Legislative Assembly and impeded on her policies and legislative initiatives. She, however, supervised the return of the Panama Canal from the United States to Panama. The Moscoso’s administration became very unpopular leading to the political misfortunes of the PRD after her tenure.

Mireya Moscoso was born on July 1, 1946, in Pedasi, Panama into a financially distressed family of a schoolteacher. She was the youngest child of six by her parents. She worked as a secretary at a point before getting involved in political activities.

In 1968, Moscoso joined the political campaign team for Arnulfo Arias for the presidential elections. Arias had been disposed twice as a President by the Panamanian military, and that was his third time contesting for the office. He won the elections but served for just nine days as he was once again overthrown by the military. He then went into exile in Miami, Florida in the United States of America. With her closeness to Arias, Moscoso followed him there and the two married in 1969 at age 23 while Arias was 67. Moscoso enrolled at Miami-Dade Community College, where she studied interior design. Moscoso inherited Arias coffee business after his death in 1988. She returned to Panama in 1991 two years after the overthrow of Manuel Noriega during US invasion of Panama. While there she took over the running of husband’s Arnulfista Party becoming the president of the party on September 29, 1991.

Mireya Moscoso political activities became very intense and gained popularity during her time with the Arnusfista Party. She, therefore, contested as a presidential candidate in the 1994 general election. She contested against the likes of Ernesto Perez Balladares of the Democratic Revolutionary Party and salsa singer Ruben Blades of the Papa Egoro party. After a heated campaign by all candidates, Perez Balladares emerged victorious receiving 33% of the votes, Moscoso had 29% while Blades received 17 percent. During the May 2, 1999, general elections, Moscoso was again fielded as the candidate for the Arnulfista Party and this time her main rival was Martin Torrijos of the PRD.

Her campaign message was centered on poverty reduction, improvement in education and curtailing privatization of state institutions. Just as her ex-husband Arias, Moscoso started each campaign speech with the Latin phrase "Vox populi, vox Dei" ("the voice of the people is the voice of God"). She won the election handsomely with 45 % compared to 37% of Torrijos.

Moscoso was sworn into office on September 1, 1999. As a divorcee, her elder sister Ruby Moscoso de Young became the First Lady of the country. Although she won the election by a wide margin, her party had fewer representatives in the Legislative Assembly, and therefore the opposition PRD controlled the Assembly. This curtailed her ability to push new policies and interventions. Perez Balladares also passed a law during his days in office, which restricted the spending of public money, a restraint many saw to be targeted at Moscoso administration to make it fail.

Though there have been previous negotiations by the substantive government, Moscoso presided the handing over of the Panama Canal from the United States to Panama under what became the Torrijos-Carter Treaties. The handover came with its own challenges as the government had the duty to embark on cleanup of the environmental problems in the Canal Zone as the US Army used the area for testing bombs, chemical weapons, and biological agents. The area was also high in lead contamination, a stockpile of depleted uranium and unexploded mutations. Panama economy also began to falter since the American canal personnel began to leave the country.

She, however, achieved success in ending Panama role in the international crime and passed a new law against money laundering and championed tax transparency. This law helped to remove Panama from an international list of a tax haven. Despite her initiatives, violent crime increased during her administration and various corruption scandals including the gift of US$146,000 in watches to Legislative Assembly members. She was also accused of nepotism in her appointments of government officials. Two years into her administration, Moscoso approval rating fell to 23% due to economic hardship and the corruption scandals. This charges and several others affected the political fortunes of her party after she ended her tenure in 2004. Her administration was described as incompetent, weak and ineffectual.

Mireya Moscoso has married twice first to the former president of Panama, Arnulfo Arias in 1969. He died in 1988 and Moscoso went on to marry businessman Richard Gruber in 1991. They adopted a son, Richard. The couple divorced in 1997.