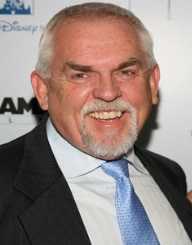 John Ratzenberger is an American actor who is best known for his role in the popular TV sitcom, Cheers, and as the voice of Hamm in the Toy Story trilogy.

Ratzenberger was born on 6 April 1947 in Bridgeport, Connecticut. Ratzenberger’s parents were Bertha née Grochowski and Dezso Ratzenberger. Both his parents came European stock. His father was of Hungarian descent, while his mother was from a Polish family. His father worked as a truck driver for the oil company Texaco. His mother worked for the weapons manufacturers Remington Arms. Ratzenberger attended St Ann’s School in his hometown of Bridgeport and upon graduation went to Sacred Heart University. He began acting while at a university. Ratzenberger worked at the famous 1969 Woodstock Festival as a tractor operator. After leaving university, he worked as a carpenter. He moved to London for ten years in 1971 and worked as a house framer.

Ratzenberger began performing with Ray Hassett as part of a comedy duo, Sal’s Meat Market. The pair would tour the UK. His first film role came in 1976 when he played an unnamed patron in, The Ritz. He had some minor characters in very successful films during the 1980s, appearing in, Gandhi, Star Wars: The Empire Strikes Back and Superman II. Ratzenberger’s breakthrough came in 1982 when he was cast in the sitcom, Cheers. He originally auditioned for the part of Norm Peterson but was eventually cast as a mail man and barfly, Cliff Clavin. Ratzenberger’s character was a know it all who is frequently mocked by other characters for his far-fetched tales. The show was hugely successful and won some Emmy’s over its eleven seasons and two hundred and seventy episode run. The show also launched the spin-off, Fraiser, in which Ratzenberger reprised his Cliff Clavin role in a guest appearance.

Ratzenberger’s best-known film work has been in voice acting roles for some animated films produced by Pixar. His first major voice acting role came in 1995’s, Toy Story. Ratzenberger voices the character Hamm, a piggy bank. To date, the Toy Story films have grossed nearly two billion dollars at the box office and won three Academy Awards. He would reprise the role in two sequels released in 1999 and 2010. He played a flea in the 1998 film, A Bug’s Life. He voiced Mack the Truck in three films of the Cars series of movies. In 2007, Ratzenberger appeared on the American TV show, Dancing with the Stars. He was the sixth celebrity to be eliminated from the show. Ratzenberger has also developed a biodegradable alternative to Styrofoam for packaging.

Ratzenberger married Georgia Stiny in 1985. Together they had two children, James and Nina. The couple divorced in 2004. In 2012 Ratzenberger married Julie Blichfeldt. Ratzenberger is an American Republican Party supporter. He campaigned in support of John McCain and endorsed both Mitt Romney and Donald Trump in their presidential campaign bids.