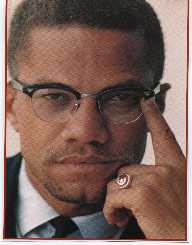 Malcolm X was born on May 19, 1925, in Omaha, Nebraska. He later became known by his Arabic name el-Hajj Malik el-Shabazz. He was the fourth of eight children in his family. His mother was a housewife, and his father- a preacher. Malcolm’s father was an active member of the local Universal Negro Improvement Association and also a supporter of the black nationalist leader Marcus Garvey. Due to his father’s activism, the family was often harassed by the white supremacist groups. The events from his childhood and his family’s experience even before he was born a big inspiration for his future life.

When Malcolm was only four years old, the Klan members smashed all the windows of his parent’s house. His father moved the family to Milwaukee and later, in 1926 to Lansing, Michigan. The racism in Lasing was even greater then in Omaha. In 1929, a racist mob set the family’s house on fire. When this occurred the towns emergency departments refused to do anything. The house burned down to the ground, and the family moved to the East side of the town.

In 1931, Malcolm’s father was found dead, lying on the street. The family believed that the white supremacists killed him, but the official police statement was that his death was a streetcar accident. This conclusion voided the family to receive the large insurance policy that he had purchased. His mother never recovered from the shock of her husband’s loss and in 1937 was committed to mental institution. Malcolm and his siblings were placed in foster homes.

After all the trouble during his childhood, Malcolm X was living in foster care and attended school. In 1938, he was kicked out of school and sent to a juvenile detention house in Mason, Michigan. The family who ran the house took good care of him, and he excelled in academics and was liked by his classmates. Malcolm was one of few black students but was elected the class president. In 1939, one of his teachers asked Malcolm what he wanted to be and suggested carpentry. As an excellent student, Malcolm realized that there is no point of pursuing education since as a black person he has no chances. He dropped out of school the next year when he was 15 years old.

After quitting school, Malcolm moved to Boston and went to live with his older sister Ella. She got him a shoe-shining job at the Roseland Ballroom. On his own time, Malcolm became acquainted with the criminal underground of the city. He soon began selling drugs and also got a job as kitchen help on the Yankee Clipper train. He fell deeper in the criminal world and was a frequent visitor to nightclubs. During this time he lived a lavish lifestyle and turned to crime to finance it. In 1946, Malcolm X was arrested on charges of larceny and sentenced to ten years in prison.

While he was in the prison, Malcolm began reading books and attempted to make up for the years he lost in his education. He was visited by some of his siblings, who had turned to the Nation of Islam, a small sect of the black Muslim community. The sect embraced the ideology of black nationalism. Malcolm converted to Islam while he was at the prison and in 1952, abandoned his surname Little and took the surname X. “X” was a tribute to his unknown African ancestors.

After Malcolm X was released from prison, he traveled to Detroit and started to work with the leader of Nation of Islam- Elijah Muhammad. The aim was to expand the movement to all black Americans in the country. Malcolm became the minister in both Harlem and Boston, and also founded temples are Harford and Philadelphia. In 1960, Malcolm X established the newspaper Muhammad Speaks to promote Nation of Islam’s message.

Malcolm X was naturally gifted, passionate and very inspirational orator. He encouraged black Americans to fight racism by any means necessary, even if it includes violence. He believed that violent revolution would help to establish an independent black nation. During his primary efforts, the organization grew from 400 n 1952 to 40,000 members just eight years later. Malcolm X became the leading voice of the radical wing of the Civil Rights Movement. He presented an alternative to Dr. Martin Luther King Jr.’s vision of racial integration and achieving it by peaceful means. Dr. King was very critical to X’s destructiveness.

Split Of The Team

In 1963, Malcolm X learned that his teacher and personal hero Elijah Muhammad had violated several of his teachings. He had several extramarital affairs, had seven children out of wedlock and was also in disagreement with Malcolm’s point of view. Malcolm X felt betrayed and angry, and in 1964 left the Nation of Islam.

After leaving the organization, Malcolm X embarked a trip to Africa. This turned out to be a major turning point in his life. He placed the American Civil Rights Movement ideology into a global perspective. He made the traditional Muslim pilgrimage to Mecca- Hajj. In Mecca, Malcolm X converted to traditional Islam and changed his name to El-Hajj Malik El-Shabazz.

After his experiences in Mecca, Malcolm returned to the States with more optimism towards a peaceful resolution of the American race problems. Malcolm returned to the United States in 1965. He was getting ready to deliver a speech at the Audubon Ballroom in Manhattan on February 21. Before he was able to start speaking, three gunmen rushed on the stage and Malcolm was shot 15 times. The three men responsible for his assassination were members of the Nation of Islam.

After his death, his spiritual and political transformation was largely ignored. He was criticized as a violent personality. His legacy was later made known to the public in 1965 when The Autobiography of Malcolm X: As Told to Alex Haley was published. The book instantly made him a hero of the Civil Rights Movement.

Malcolm X was married to Betty Sanders. She was also a member of the Nation of Islam. Malcolm and Sanders had six daughters together. Sanders later took the surname Shabazz and became civil and human rights activist.