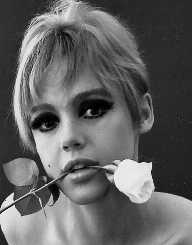 Edie Sedgwick was a renowned fashion model and actress. Born on April 20, 1943, she was one of the Andy Warhol’s superstars. She came to the limelight with movies like Poor Little Rich Girl, Beauty No. 1&2, Vinyl, Horse, Kitchen, Space and The Girl of the Year (all in 1965). She also starred in Lupe, Outer and Inner Space, The Andy Warhol Story, Chelsea Girls (1966), Four Stars, 1967 and Color Me Shameless, 1967, and Ciao! Manhattan in 1972. Because of her agility in the movie industry, she was nicknamed, ‘Superstar’ and “It Girl” while the Vogue magazine named her a “Youthquaker.”

Edie Sedgwick was born on April 20, 1943, in Santa Barbara, California, into a very wealthy family. She was the seventh of eight children by Alice Delano de Forest and Francis Minturn Sedgwick. His father was a rancher and sculptor. Despite coming from a wealthy family, she had a strict and controlled childhood. Sedgwick and her sibling were cut off their peers, living in isolation, turmoil and some social pressure from their parents. They were not allowed to mingle with other children since they were psyched to see themselves as superior to most of their peers.

By the age of 13, Edie Sedgwick had turned inward and begun the life-long struggle with anorexia and bulimia as a result of restrictions on life on the part of her father. It is revealed that when she was born, she nearly died because of complications but her parents went ahead ignoring doctor’s advice concerning Francis' health issue and gave birth to the eight born with the reason of wanting to have a spectacular number of children especially, male children.

While at the Branson School, Edie Sedgwick suffered an eating disorder and had to return home. Due to her medical condition, her father insisted she been confined to a private psychiatric hospital; Silver Hill Hospital in New Canaan, Connecticut. However, her weight kept dropping since there was no restriction on her at the hospital. She removed from Silver Hill and sent to Bloomingdale, the Westchester County, New York division of the New York Hospital where there was an improvement in her health.

Edie Sedgwick got pregnant after a brief relationship with a Harvard student; with the intervention of her mother, she opted for an abortion with the excuse of her psychological issues.

Edie Sedgwick moved to Massachusetts to study sculpture with her cousin, Lily Saarinen in 1963. Whiles there, she associated with an elite bohemian fringe of the Harvard social scene which involved gay men as well. Edie had neither feelings nor security when it came to men. Even though she was having a good time at Massachusetts, she was affected by the death of her two elder brothers; Francis and Robert. Francis died as a result of suicide at the psychiatric hospital while Robert (Bobby) died when his motorcycle crashed into the side of a New York City bus on New Year’s Eve (1965).

At the age of 21, Edie Sedgwick’s maternal grandmother gave her an $80,000 trust fund. With this, she moved to New York to start a career in modelling. In New York, she took solace in recreational drugs and was introduced to LSD. In 1965, she met artist and avant-grade filmmaker Andy Warhol at a party. Having a close relationship with Warhol, she was given a cameo role in the film Vinyl, despite it being an all-male cast film. Her next minor part was in Horse. After these two roles, Warhol decided to use her in several other projects starting with Poor Little Rich Girl in 1965.

Edie Sedgwick also appeared in films like Kitchen, Beauty No.2, Outer and Inner Space, Prison, Lupe and Chelsea Girls. Her relationship with Warhol strained, and both parted ways.

After parting ways with Warhol, Edie Sedgwick tried to establish herself as an actress but to no avail. She started shooting the semi-autobiography film Ciao! Manhattan but the filming was suspended due to her drug abuse and unstable mental health. Her use of drugs and alcohol became intense and at a point suffered severe burns after accidentally setting her hotel room on fire. Sedgwick also had mental issues and had to return to her family in California. She completed the shooting of Ciao! Manhattan in 1971 and was released in 1972.

Edie Sedgwick met Michael Post, a fellow patient while she was committed to the Cottage Hospital in the summer of 1970. They got married on July 24, 1971. She stopped abusing drugs for some time and later that same year in the eight-month, started abusing drugs again. She died on November 16, 1971, at age 28, with the cause assumed to be a barbiturate intoxication, or caused ethanol intoxication. She was buried in a cemetery in Ballard, California.