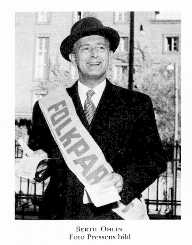 Bertil Gotthard Ohlin was born on April 23, 1899, in Sweden. He was born into a big family. He was brought up alongside six siblings. He started attending school at the age of seven. He received his baccalaureate at Helsingborg earlier than the children of his age. He later enrolled at the University of Lund for a degree in mathematics, statistics, and economics. In 1917, he passed out of the university having studied under Professor Smil Sommarin. He later went to study under Professor Eli Heckscher. He then enrolled at the Harvard University for his MA. In 1924, he received his doctorate from Stockholm University.

Bertil Gotthard Ohlin began his career as a lecturer. In 1925, he was appointed as a Professor at the University of Copenhagen. In 1928, his thesis was printed in the Harvard Economic Studies manuscript. He was later appointed as a Professor at the Stockholm School of Business. At the school, he began working on his international trade theorem. His theory was known as ’Heckscher-Ohlin Model of International Trade.’ The theorem provides that countries that are capital abundant would have to pay higher wages and thus industries depending on labour would crush the economy of the country. He became popular with the theory that he received an invitation as a guest lecturer at Cambridge.

In 1944, Bertil Gotthard Ohlin joined politics when he became the leader of the Liberal Party. He was always positive to social reforms as a politician. He had to set aside his economist career to focus on politics as politics took up most of his time. His party was an opposition party in the Swedish government. In 1970, he retired from the parliament. He went back to his economist career. He went back to writing articles and giving lectures. He also researched on his monetary theory and inflation-protected taxation.

In 1977, Bertil Gotthard Ohlin received the Sveriges Riksbank Prize in Economic Sciences in Memory of Alfred Nobel jointly with James Meade for their path breaking contribution to the theory of international trade and international capital movements.

Bertil Gotthard Ohlin died on August 3, 1979, at the age of eighty.